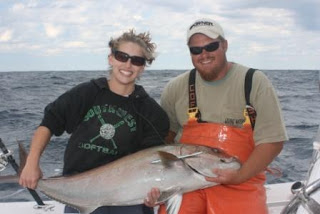 Ricky Croson’s first memory of fishing was fishing the white perch run with his father and grandfather near his Washington DC home. Later he moved to the North Carolina Outer Banks where he surf fished and fished along the many canals near Kill Devil Hills. Many days his mom would drop him off at the pier that would serve as a babysitter while she worked. At age 12 Ricky moved to Wilmington where he continued to fish and worked summers as a deck hand on a number of area charter boats. During this time he work for Wilmington’s Tex’s Tackle for nearly 6 years. This job gave him both access and exposure to the latest trends in fishing tackle. It also allowed him to continue fishing while earning a living.

In 2006 Ricky started “Living Waters Guide Service”. He founded his service determined to find or develop a better way of fishing. He learned that in many ways the tactics of fishermen in the United States was far less effective that those in countries like Japan and Australia. This is seen with the Japanese fishing in nearly 1000 feet of water with spinning reels as well as techniques to fish in the 12 knot currents that are common around the Japan’s outer islands. Ricky soon found that the traditional teaching of fishermen here in the U.S. were outdated. Investigating the tactics of these countries taught him that trolling a spread each lure has a specific purpose and by choosing the right lure and positioning it correctly yielded far greater results than traditional techniques.

Over the past few years, Ricky has worked with multiple manufacturers like Jody Gay at “Blue Water Candy” and “Fathom Offshore” to develop lures that enable fisherman to duplicate the approach of the Japanese and Australian fisherman. This new approach not only increases the catch, but also expands the species being caught.
Today, Ricky’s working with Bly Riggers on developing a single pole outrigger that will accommodate 3 lines and remains tangle free. It’s a concept that’s especially designed for smaller boats. You simply put the single pole in the rod holder on the leaning post or the rocket launcher and the spaced lines are trolled directly behind the boat enabling the captain to easily control his rigs.

The future appears bright for this innovative fisherman. His techniques and lure innovations have proven successful both to his fishing success as well as others. Today, you readily see the results of his efforts in countless tackle shops and even large fishing retailers like Bass Pro Shop but he’s quick to remind you he gives a lot thanks to folks like Tex Grissom of Tex’s Tackle in Wilmington and Jody Gay of Blue Water Candy for their input and expertise. If you’re like me, I can’t wait to see what he comes up with next.