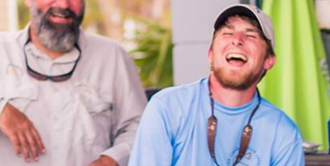 Charleston and the rest of the Low Country is rapidly becoming the saltwater fly fishing capital of the East Coast. Area fishermen are learning that fishing the flats as in places like the Florida keys has both benefits and added sport. First, in many respects it lengthens the fishing season by allowing us to now fish in the winter months by pursuing the fish into shallow areas with the warmer water. Also the more stealthy fly lures enable fisherman to approach the many times jittery target fish more effectively when the months are cooler and the fish are less aggressive.

A prime example of this pursuit of saltwater fly fishing phenomenon is seen in the new breed of fishing guides like Captain Austin McCullough. In a recent conversation this young guide I was impressed with both his passion and knowledge. The topic of our discussion was “fishing for spring Reds”. He told me that while the winter fishing was somewhat slow the weather and water was gradually coming in and the reds were becoming more aggressive. Over the past few weeks schools of 40 to 100 fish had been spotted.

Even though he prefers fly fishing, he will still fish light tackle commonly using a 2 hook rig with a ¼ ounce weight with live or cut bait such as cut mullet or cracked blue crabs. The 2 hook rig is more widely used in the Low Country area and has not gained popularity yet along the North Carolina coast.   When fly fishing he uses a 6’ to 6’2” fly rod that enables him to produce a more accurate cast.

His strategy includes poling the flats looking the exposed tail of the Reds as the fish scan the bottom for fiddler crabs and food. This is usually an area with short grass and a hard sandy bottom. With the shallow water and the fishes head pointed down, the tail fin becomes exposed. This is the target. He casts in front of the fish or school of fish and then strips back quickly to the school before letting the lure sit. The incoming tides and bigger tide swings seem to be the ideal time to fish.

Austin believes that the transition between the cooler water and air temps of winter and early spring can be a challenging time of year to fish for Reds. He made it clear that same challenge makes it great fun. It’s fly fishing at its best and forces the angler to be at the top of his fishing game.