Relaxing With Ray…..a captain looks back

After leaving the wonderful world of being a fishing guide in 2001, I entered the corporate world of the marine industry. Within a few short weeks I found myself traveling the entire country. Each week I would leav 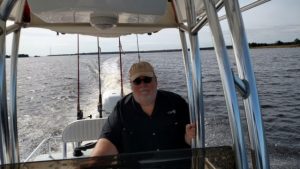 e home to travel to the airport or drive to my challenge of the week. It was a great career and still close to the water, but never fishing. Even by taking the new job, my plan was to continue to keep fishing at the same blistering rate I have fished for the past 5 years. My new boss told me that would be no problem. In reality my fishing stopped all together. Between the time on the road and in the air I only had time for an infrequent boat ride with my wife. My downtime off the job was dedicated to family and chores and even many weekends, I was still on the job. My old but beautifully restored 1976 20’ Shamrock was just sitting idle in the slip and waiting for our next adventure.

After several months of this enjoyable but maddening pace I decided it was time to turn off the laptop, put the cellphone on vibrate and head to the marina. It was about 3:00 pm when I walked down the gangway with a single spinning rod and small tackle bag, looking forward to disappearing from corporate America for just a few hours. The early fall weather was perfect with 73 degrees and winds light and slight out of the southwest. I eased on board and checked out the boat since it had been a while since she had been out. With all systems up and running I backed her out the slip for the short trip across the water way to Wrightsville Beach Marina for a splash of fuel and a bag of ice. I stuck my head in the small dock house and was met with the always smiling face of Sam the dock master. We shared a brief friendly conversation then I paid for my gas, got my ice and grabbed a diet coke from the vending machine. Finally….ready to go!

I fired the engine and listened carefully, enjoying the sound of the Chevy inboard thumping like an idling Harley Davidson. I threw off the lines and came back to the helm, slowly putting the boat in gear. The purr of the Velvet Drive transmission signaled the 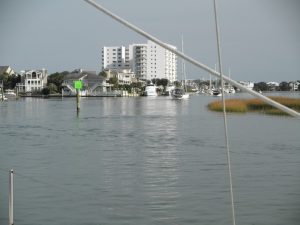 boat was running well. I slowly entered the I.C.W. and headed just around the corner to Motts Channel for the first cast of the day. With ease, I moved past the end of Wrightsville Marina, past the Marine Max docks to an area behind Motts Channel Seafood.  I spotted an oyster bed where I had seen other guys fishing in the past and thought it would be a good place to start. Making sure to quietly anchor my boat, I was able to come to rest in 3 feet of water in perfect position to the oyster bed. While trying to avoid the wrath of the sharp oysters ripping my line, I cast a plastic bait up into a small creek. Several fruitless casts later, I decided to cast out into the channel itself to see if it held any moving fish. On the second crank of my reel I felt a short tug on my line, then another, then a hard pull that forced me to ease the drag to avoid a line break. This fish was not quick, but instead, felt like a slow moving bulldozer under the water’s surface. Over the next 45 minutes I would gain line and then the fish would take it back. This duel moved up and down Motts Channel while boats drifted by in amazement at what might be on the end of my line. Unable to retrieve my anchor line to free the boat for the chase, I was forced to just sit there and continue to fight. The fish was moving across the channel toward the Marine Max docks. He soon took the line around a piling where it quickly snapped.

Puzzled at what just happened, I stared at the place where my finned adversary had been just seconds before. He was gone. I went to the wheel of the boat and flopped down on the bolster seat and started laughing. In my past I caught a massive Bluefin Tuna off the Carolina Coast, large Redfish in Louisiana and big Wahoo and Mahi off the Florida Keys. But the best fishing fight of my aging life came on a Thursday afternoon in October just a few hundred feet from my dock. It wasn’t with a big trophy fish, but instead a Stingray. A trash fish. His body was over 4 feet wide and the power of a Georgia mule.

I placed the rod in the boat’s rod holder, fired the engine of “The Reel Article”, pulled up the anchor and slowly mad my way back to the dock. I had only been gone a little more than an hour but it was an hour I’ll remember for a very long time. As I drove back home I realized that the stress of my job had been mysteriously lifted. I had a whole new perspective on things and I started to smile again. Many times since that day I have talked about that 45 minute duel with the stingray and today I just refer to him as “my friend Ray”.  I understood that fighting a trash fish for 45 minutes near my dock was a subtle 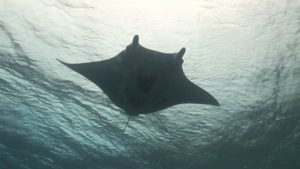 reminder to take life easier and make room for the little things, because those little things can stay with you for life. Further proving that God loves the fisherman and has a sense of humor. I wonder where Ray is today and if he’s still talking about catching that “big ole white boy back in 2001?