One thing with many products is that they are not improved over the years. This is how many lose their competitive edge. After taking a look at Precision Auto Reels, we found that this was a company that did not fall into that category. Precision Auto Reels has a long and stellar history of providing one of the best electric reels in the fishing industry. In the past few months, owner Dave Prentice has taken the company’s reels to the next level. We asked veteran commercial fisherman and charter fisherman, Rod Bierstadt of OnMyWay Charters out of Carolina Beach, NC, to share his thoughts on today’s Precision Auto Reels.

Rod was quick to say that the original Precision electric reels were great and have stood the test of time. They have 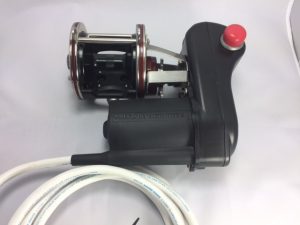 been a key competitor to other similar electric reels in the same class with a price that is hard to beat. He was particularly impressed with the latest version of the product that has just been introduced. Owner Dave, has brought his engineering background to the table by making a number of improvements to an already respected product. He has increased the quality of the reel’s components such as the addition of a push button switch option, as well as the toggle that has been previously offered.  The latest version now comes with a high grade injected plastic body that is UV resistant to increase the life of the reel, and a heavier power cord with most components being stainless.  This new body also acts to protect the improved sealed motors and water tight gaskets that continue to bring longer life and dependability to the product.

These reels are responsive and come to the table with the torque needed to pull even the biggest grouper from under that deep ledge. The speed is more than adequate and can take care of the need of most situations. With these features, the Precision Auto Reel easily finds as place with the commercial fisherman or the weekend angler.

We have to give the Precision Auto Reels A+ when it comes to ease of use. They have simplified the reel change process to only 4 bolts. The reels can be used with both black and red Penn 4/0 and 6/0 reels. This setup allows quicker and easier change between reels and this feature continues to be a popular selling point for Precision. The day to day care and maintenance is rather basic. Rod tells us to begin by tightening the drag and then wash the reels with boat soap then rinse. Towel dry.

When it’s all said and done the Precision Auto Reel is a serious player in the area of electric reels. It’s past reputation of solid dependability has now been surpassed thanks to the vision of owner, Dave Prentice. The improvements and changes are well thought out and add substantial quality to the reel’s performance and value. This Precision product not only holds its own with more expensive electric reels but in some cases it solidly beats them. It continues to prove that it’s a great reel with it comes to construction, performance and value.