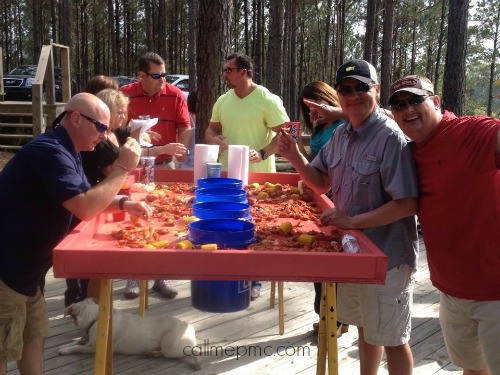 Have you ever wondered where the Low Country Boil got its name?  You can probably take a good guess because of the region, the southern coast, where you may be able to find a small hill, but otherwise is flat. This dish is also known as Tidewater Boil, Beaufort Boil or Frogmore Stew. It gets its name from a place that has only a post office on one side of the road and a two-story white country store on the other.  Frogmore is the mailing address for the residents of St. Helena Island just off the South Carolina coast.  The town was named by John Grayson, an early owner, named after his ancestral English country estate in England.

There is no greater feast than a pot full of “boil” and it serves as a great social event for all classes and ages. It’s a gather of family, friends and neighbors dressed in sweatshirts and fishing hats for the fall air and fellowship. It has no pretense and the only expectations are good times and delicious southern cuisine. The boil is accompanied by your choice of cold beer in a koozie, wine in a glass or sweet tea in a mason jar. Your napkin comes on a roll with a paperboard tube in the middle (paper towels). You’re eating utensils are…..well, you really don’t need any. Just your fingers.

We gathered with some friends to celebrate a very special occasion and a Low Country boil was the meal of choice.  Sitting outside on the patio, we first started with our beverage of choice and appetizers that each couple wanted to share from their kitchen. Tasty treats like mushrooms stuffed with cheese and jalapeños and homemade sausage hot off the grill just to name a few.   Laughter, music and fishing stories filled the air.  The sunny afternoon was gorgeous and we were all there to take in being a part of this grand event.  There’s something about eating hot seafood with your hands that makes sunshine feel even better. 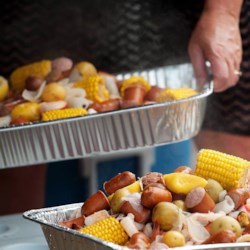 The stockpot of water was prepped with generous portions of spicy blends of Old Bay, lemon slices and other Cajun seasonings. The gas burner was hot and ready for the stockpot and it’s first layer.  The layering of ingredients were onions, potatoes, corn on the cob and my husband’s homemade sausage which really brings out the most mouthwatering flavors, and local fresh caught shrimp.  As each layer is added, the aroma of the spices fills even the outdoor air. We then drained and dumped the boil out on a table covered in newspapers for a fun mess of a meal.  Just put some hot sauce, cocktail sauce and melted butter out and let the eating begin!

As we shoveled the steaming bounty onto the paper plates from the pile in the middle of the paper covered table the conversations were quickly reduced to an occasional yumm. Then only the sound of cracking shrimp shells and the slurp of corn being eaten was heard. This process was repeated until only a pile of shrimp shells and corn cobs remained.

After dinner we settled in to watch the sun go lower and lower, creating beauty with the setting of the sun.  It wasn’t long till the after drinks like Irish coffee and pecan pie arrived. The cigars and fishing lies soon appeared. With laughter and music still going, we continued with conversation that went well into the late evening. Finally, it was time to say goodbye,  but we vowed to make to it again soon.