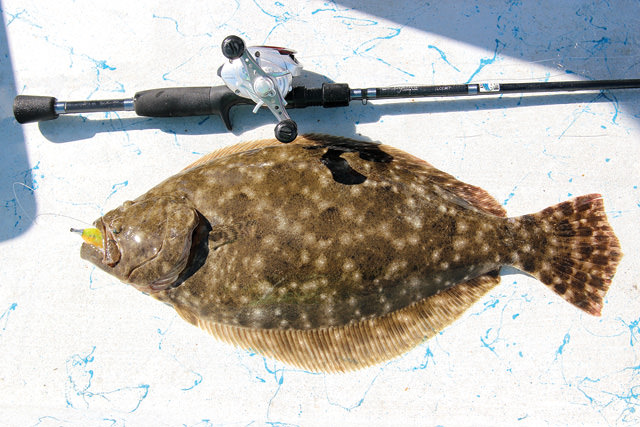 While the evolution of Flounder fishing has been slight, there still have been notable changes over the years. We wanted to look back at that evolution and get a glimpse of what it was like using the “Old School” Flounder fishing tactics. No better information source is Coastal Carolina Fisherman’s Director of Inshore Fishing Instruction, Captain Lee Parsons.

The first thing Parsons mentioned, was bait. Back in the day, the “Old School” anglers didn’t have scented baits like gulp at their disposal, and it was not practical to run to the tackle shop for a few dozen mud minnows, which made success entirely dependent on live bait. At the time, those mullet and menhaden were virtually the only baits considered when enticing the flat fish. Remember: the Flounder has a tri-axes mouth and can consume large baits. To compensate for larger baits, the rigs featured double swivels allowing the bait to swim more effectively. Our modern “Kale Hooks,” which used to be called “Flounder Hooks” ranged in size from 2/0 to 4/0 depending, as the hook needs to be heavy enough to stay at the bottom.

Rigging for Flounder was simple and dependable using a slide rig as the common set up. This was usually made with around 50# mono for the leader, since Braid Line had not made its debut. Depending on the current, an 8 oz. weight was favorable, and many times nuts from the Hardware Store were used because they were less expensive, and easier to replace after frequent break offs.

Captain Lee is also quick to remind us that ‘popping cork is your friend.’ When it came to stalking Flounder, the old anglers looked for a bottom that had a significant change in elevation in a very short distance, to lure the Flounder from the protective deep waters. Lee says that, “Flounder will always rise to the occasion” to attach the bait.

The old guys were amazing at locating great Flounder fishing holes and using the bare basics to catch them. It took keen fishing knowledge and creativity back then and we now enjoy the benefits. We appreciate Captain Lee Parsons sharing the tricks of the trade that are so valuable to today’s Angler.