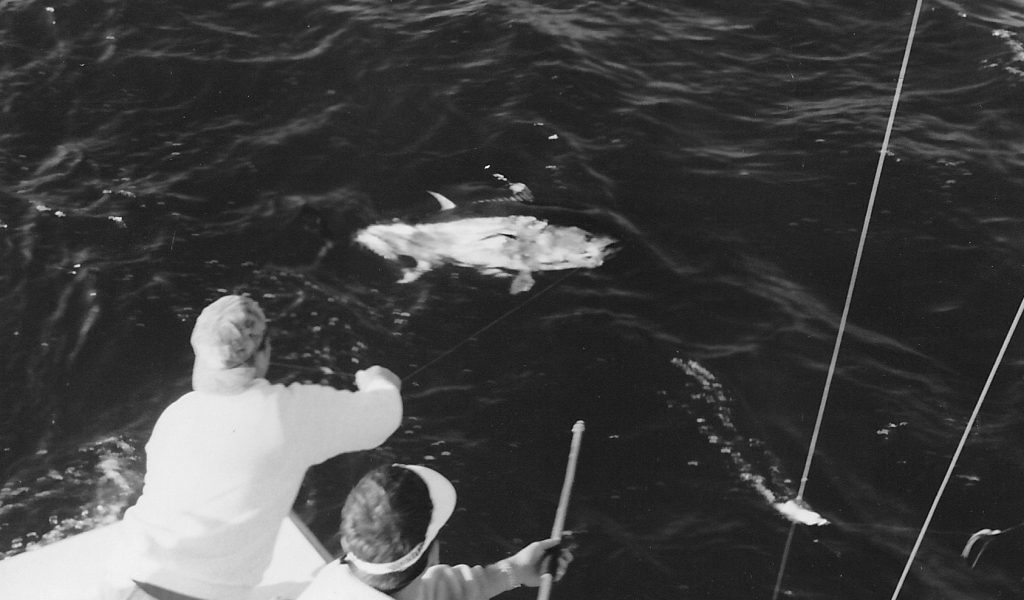 Over the past 25 years I’ve met a number of great people both in and around the sport of fishing. This includes skilled guides in the Florida Keys, Halibut fisherman in Alaska and a Cajun talking young guide in Louisiana that kept his pet alligator in his bathtub. But one of the most memorable has to be from my own hometown of Wilmington, NC. I came to know Dr. Ben Smith in the mid 90’s when my wife went to work at his dental practice that he shared with his son, Ben III. From her first day, my wife would bring home stories 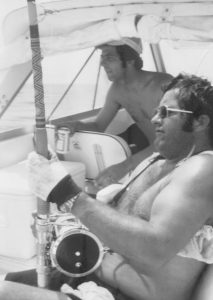 about this big bear of a man and his love of life, family and most of all the outdoors. Often times his dental office would be filled with the tempting aroma of venison chili or fried fish cooking on his gas cooker just outside the patio entrance. The office walls filled with images of the many wonderful fishing and hunting adventures from over the years. While dentistry was the business at hand, fishing and hunting was never too far away.

Doctor Ben, as he was called, was a prominent figure in Wrightsville Beach and the entire Carolina coast, thanks to fishing exploits with his 3 sons aboard his Bertram sportfishing boat, “Tooth Doctor”.  The four  were well known in the sport fishing tournament community at places like the “Big Rock Blue Marlin Tournament” and many others. The tournament was not won until the “Tooth Doctor” had come to the dock and their catch had been weighed.

One evening in December in 1997, at his office Christmas party, Dr. Smith asked me if I wanted to go fishing the next day for Tuna. In an instant he had his answer so he told me to be at the dock at 5:00 am. I went home that night far too excited to sleep. I thought about the chance of catching a big Yellowfin Tuna and worry about doing something dumb that would embarrass me in front of these fishing rock stars. So, at 4:00 a.m. I shot out of bed, jumped in my truck and headed to the marina only stopping for breakfast which consisted of a coke and pack of cheese crackers. I made it to the boat dock at 4:40 a.m. with time to spare only to wait for another hour until the rest of the sleepy crew appeared. It was OK since I got by the first hurdle (being late).

I joined Ben III on the flybridge as we were heading out of Masonboro Inlet in the dark. Once moving past the sea buoy, Ben instructed me to just watch the instruments and controls while he went below for a pre-dawn nap with the others. As a novice boater at that time I feared some sort of catastrophe that would be due to my lack of experience or negligence. With that said, I maintained a sharp watch and the “Tooth Doctor” made it to the fishing grounds safely. However, as the sun began to rise, I saw that land was still off our port side as we ran north. I knew that Yellowfin Tuna were Gulfstream fish and I was pretty sure we weren’t in the Gulfstream since I could see people on the beach. But when the auto pilot pushed the throttles back to neutral, I didn’t ask any questions. Again, a part of my “don’t do or say something stupid” plan. 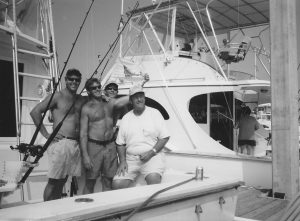 As the rest of the guys stumbled out of the salon, wiping sleep from their eyes, Ben III started jigging for bait while the others set the massive rods in the rod holders and setting the outriggers. A few minutes later we were rigged and ready with plenty of bait, rods set and pulling lines. The day was warm for December and the winds were slight and light. Doctor Ben was in his place at the helm and fellow angler Clay Walker was looking aft for any sign of activity.  After about 20 minutes of trolling I relaxed in the fighting chair to enjoy the day when…..it appeared…. that massive hole in the water opening up just behind the boat. A giant fish had just taken the bait and one of the nearby reels started screaming. Stunned, I froze in the chair, having no idea what to do. All I could hear were reels peeling off line and a lot of profanity. I started to get out of the fighting chair and out of the way when someone yelled, “stay there!”  and was shoved back in the seat. The next thing I knew the rod was in the gimbal and I was using all my strength attempting to recover the line the fish had taken. From the flybridge, Dr. Smith shouted a warning not to lose the rod and reel! 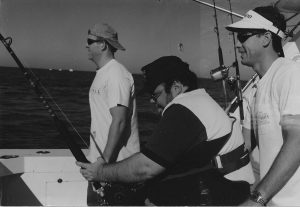 After a while of cranking the reel, my hand started to cramp. The only thing I could do was change hands only to have the watchful eye of Dr. Smith catch my desperate tactic and yelling out, “stop double clutching.” When what seemed to be an eternity, we were able to get the fish to the side of the boat, thanks to Dr. Smith backing up to the giant fish, and me “double clutching” to gain line when I could. With the fish beside the boat, it was tagged and safely release. Then and only then did I know that it was a giant Bluefin. Three more Bluefin were caught that day and released on the “Tooth Doctor” before the bait schools swam back out to deep water. I also learned that we were just off Swansboro, NC rather than the Gulfstream. It was definitely a world class day of fishing. Four giant Bluefins in a single fishing trip!

A picture of that first Bluefin still hangs on the wall of my office today and serves as a wonderful memory of that day. However, the best memory is that I got to spend a day fishing with Dr. Ben Smith and his sons Ben III, Walter and Sam. The best I can relate it to is a kid being able to play catch with Micky Mantle and the New York Yankees. While I have a great picture of my Tuna, I regret there’s no picture of me and Dr. Ben. In addition to his great fishing exploits, he was always willing to share them with his family, friends and some guy he barely knew that he came to affectionately call “Double Clutch.” A name I’m proud to carry thanks to the man that gave it to me. He was not only a great father to his sons, but also a great boss to those he employed, making the workplace fun, not just a job.

By the way, when we got back to the dock, I jumped off the boat and fell flat on my face. So much for not doing anything stupid.

Thanks Dr. Ben for my greatest day of fishing. You’re sorely missed. 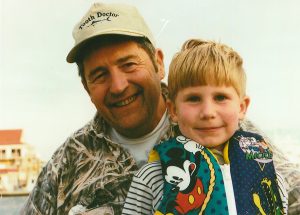