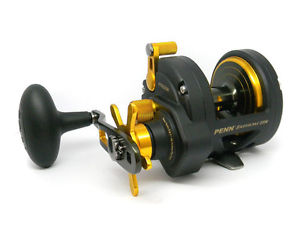 The first thing that caught my attention to the Penn Fathom reel was the beautiful black and gold color combination. Now I understand that beauty is not what catches the fish, but this story is not over. Having been a Penn fan for a number of years, the Fathom impressed me with its more than adequate anodized aluminum frame. This series of 5 reels runs from the smaller FTH 12 all the way up to the FTH 40 for the offshore needs. The one I chose is the FTH 25 which is middle way through the series. It comes in both narrow and standard spools depending on your need. I was impressed with the compact size and balanced feel of the reel. The model is equipped with the traditional Penn star drag that features Versa-Drag, drag control that consist of 6 stainless steel ball bearings. I’m a fan of the dependable star drag and glad to see still on the Fathom series.

The narrow spool version holds 650 yards of 20# braid and 450 yards of 5o# braid which makes it a great option for the anglers that like fishing the offshore and nearshore structures. The Fathom series includes a full metal body and side plates that do a great job of keeping a perfect gear alignment under heavy loads. Another feature I like is the pre-drilled tie off holes in the spindle to prevent the problem of braided line from slipping on the spool. I was amazed at the 25 pounds of drag with the 6.0.1 retrieve ratio. This amounts to about 40 inches per crank. When I put the unspooled reel into free spool it ran super smooth and just kept on running. The aluminum spool comes with indicator of “full, 2/3 and 1/3 levels which is a must for the bottom fishing angler. It also comes equipped with an instant anti-reverse bearing with a silent back up rachet feature.

Overall, the Penn Fathom series does not disappoint. It’s built for the long haul and has the features that count rather than the bells and whistles found on other reels today. Above all, it’s built with performance and durability in mind. It’s lightning fast best of all and offers all of this in 5 sizes to fit the needs of the offshore and nearshore serious fisherman. No matter if you’re jigging, live bait fishing or even casting, the Fathom is a great option to seriously consider. Penn continues to get my vote.