Top Bucket List Places To Fish On the Carolina Coast 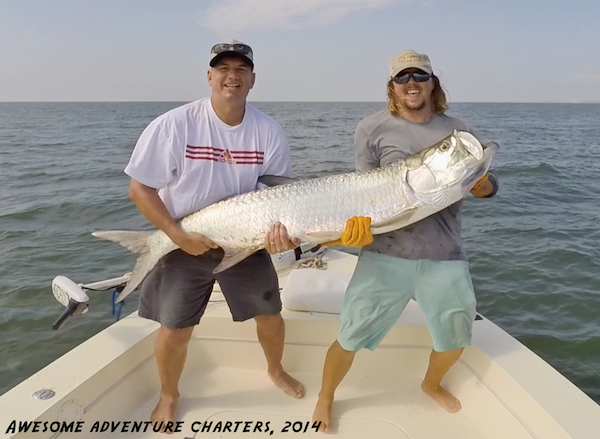 The Carolina’s has a wide range of great places to fish along its coast. We have just as wide a list of species to fish for. With that said, maybe it’s time to start thinking about your fishing “Bucket List”.  The “Bucket List” is for the true sportsman. The guy or girl fishing for the sport of it and not to fill the cooler. Take a look at these places that you may want to put on your list.

For generations, Carolina Beach has been the epicenter for great flounder fishing. You can

fish the Cape Fear River or the ICW for some of the biggest flatfish you can find. One of the most popular hot spots at CB is Snow’s Cut that was home to many flounder fishing records. Snow’s Cut is a man made passage behind Carolina Beach that carries tons of bait in it’s ripping current. It’s a little bumpy, but filled with flounder.  You can also head out the inlet to one of the many nearby structures and try your hand at the new trend of flounder fishing over structure. If you’re familiar to the area you should do OK, but if you’re not, consider a guide. Captain Dennis Barbour is experienced in both the inshore version and nearshore. Captain Ray Dixon also is a great guide that specializes in flatfish angling. While you’re there make sure you swing down town and get yourself a hot Britt’s doughnut which is considered to be one the best in America or a cold beer at the eclectic Fat Pelican on the main drag in Carolina Beach. 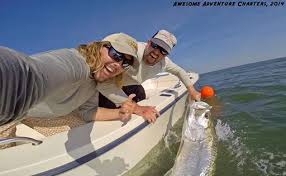 along the Carolina Coast. A number of fishing guides in the area like Captain Kai Williams specializes in Tarpon fishing. Like Florida and other areas the tarpon can be a hard species in any part of the East Coast, but your chances are better along the lower part of the South Carolina coast. These big fighters weigh in heavy and will give you a work out and they will also give you the memories of a lifetime. I recommend an experienced guide and plan to go on the warmer months. Call ahead and see how they’re biting. While you’re there, end the fishing experience with a great dinning experience at the Sage Room in Hilton Head. Matt and Carol Jording offer a fantastic house filet in a beautiful atmosphere. Big fish, great steak means a big check mark on the bucket list. 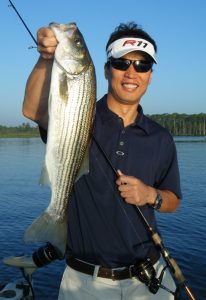 Don’t let the talk about Striper catch restrictions fool you. The recreational striper fishing is alive and well in many parts of North Carolina and the Upper Roanoke river serves as the “Go To” location. Captain Richard Andrews of Tar-Pam Guide Service recently told us that the spring bites have never been better. This is a great species for the early spring sportsman that’s looking to catch big fish away from the coast. These stripers are great fighters and you can catch several a day. Again, you may want to consider using an experienced guide like Richard to make sure you’re rigged right and doing all the right things to save the fish for the next angler. It’s a great way to start your fishing season next year. Why wait to fish when you can go to the Roanoke River and fish the early spring.

This is one that’s on my list for this year. It seems that every August the big bull redfish migrate to North Carolina’s Pamlico Sound. These 30-60 pound monsters love the topwater lures. So if you want to catch a big fish on topwater, this is the time and place. Medium to heavy tackle is needed or you’ll just get frustrated with break offs. These reds are old and big as wel 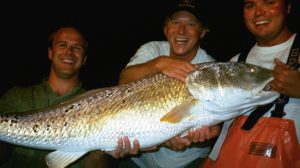 l as feisty.  It’s also important to remember that these fish are all over the slot size and have to be released. There only there for a most of August and part of September so plan ahead. If it’s your first time, a guide is recommended. Richard Andrews of Tar-Pam Guide Service is a great place to start. These are big fish and they didn’t get big by being stupid. When you head home, drop in on Kings Chicken in Washington, NC. They’ve been around for over 60 years and serve old school fried chicken and cheese cathead biscuits that will be as memorable as that big redfish you caught earlier in the day. Both the red fishing and chicken are a true Eastern North Carolina experience. 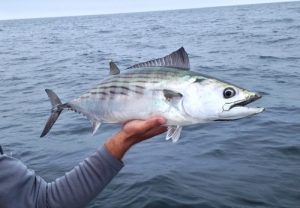 Now this is a fish that brings the art of drag management to the table. These silver rockets can spool off loads of line in seconds and have you scrambling to work the drag. When they hit, your heart will skip a beat. In recent years the bonito seem to have migrated in larger numbers just off the coast of Topsail Island, NC. While they are still caught in good numbers from the Cape Fear River entrance to Cape Lookout, Topsail seems to be the hot spot for the past few years. They come crashing bait balls and will chase a wide array of lures. They usually appear around the middle of April, depending on the water temp and stay of only a few weeks. These fish will test your angling skills and scare the crap out of you with their sudden strikes. I recommend a guide with this species since it is nearshore and the fish migration can change day to day. Guides like Captain Mike Oppegaard is well versed on bonito fishing. There is also Captain Lee Parsons of Gottafly charters. Fishing with Captain Lee should be an item on everyone’s bucket list. On the way back, swing into the Sawmill Restaurant in nearby Hampstead for some good old comfort food. Everything from homemade meatloaf to fried shrimp that’s just off the boat.

OK, now we’re getting to the heart stopping, profanity shouting part of the bucket list. 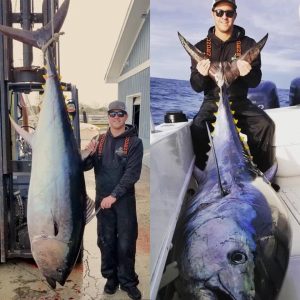 Fishing for giant Bluefin Tuna is one of the ultimate battles with a fish. I did it in 1995 and my shoulders and arms still hurt today. But the picture of that big fish still graces the wall of my office and hangs in a place more prominent than that of my wife and kids. Looking back, I’m not sure if I caught a big Bluefin Tuna or a big Bluefin caught a big old white boy. We caught a total of 4 that December day and it was surely a “Bucket List” experience. This a not a fishing for the inexperienced. Unless you have a larger boat and the appropriate gear, you’re taking a walk on the dangerous side. The charter boats in the area can certainly be the better choice. Before you head out for a day and a fish you’ll never forget, stop by Sam & Omie’s for breakfast. They’ve only been around since 1937 and that says something. They’ve been feeding fisherman for many years and they do it right.

King Mackerel fishingisone of the most exciting types of fishing. Kings are vicious and great fighters. When you hook them, they will commonly sky, which adds to the adventure. It’s a combination of knowing where they are, rigging a tempting bait then slow trolling. When the fish hits it becomes a combination of drag management and boat handling as well as 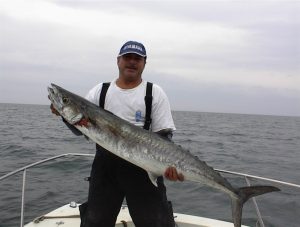 gaff artwork. The Morehead City area is frequently the home of the Southern Kingfish Association’s National Championship. To really make it a “Bucket List” event, you can hire the 2015 National Champion (Captain Eris Jones) to take you. Don’t let his “Good Old Boy”demeanor fool you. He really knows his stuff and there is plenty to know when it comes to King fishing. This combination of one the best locations on the east coast and a frequent leader board resident could make one of the first check offs on your list. When you come back and your Mackerel steaks are in the cooler, stop off on your way out for a burger at El’s Drive in. This place has been here since before my wife was in high school and that’s saying something. The burgers are juicy and old time fries area crinkled cut. Don’t wear a clean shirt cause they drip a lot of goodness. It’s on my “Bucket List” each time I go to Morehead City.

Fishing for big redfish is great fun and when it comes to the place to have that fun, you have to consider Charleston to be one of the top locations. All the surrounding creeks and rivers is a fantastic holding ground for bait. Another factor that gets Charleston to the top of the Coastal Carolina Redfishing list is the guides. The area has a high number of fishing 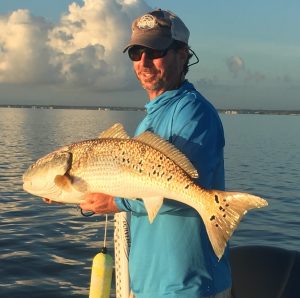 purest that brings a stunning amount of experience and knowledge to the Low Country game. Due to the complex creek and river system, I recommend that you consider a guide. Also navigating around the busy shipping traffic can be daunting. With that being said, the reds are big and isfishing great. It’s a breathtaking backdrop to a day of fishing. The 2 locations of Haddrells Point Tackle Shops are great places to get the scoop on the current fishing status. Their staff are mostly made up of longtime fishing guides and really know their stuff. When looking for guide options, there are many and they’re all great. Captain Kevin Blair is a good place to start. Lot’s of experience and better yet, he thinks outside the box with new concepts and tactics that makes him one of the strongest guides in the Low Country. In short, Charleston and Redfishing are like baseball and Fenway Park. The combination that deserves a place on your bucket list.

Time of Year: All Year 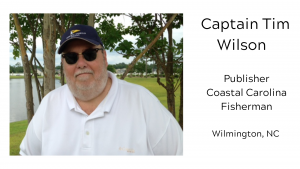