The Eyes of a Fishing Legend……..Passion

With the Legends of Saltwater Fishing Academy just around the corner we wanted to tell you about why the event is so unique. That uniqueness lies in the speakers. The actual Legends. Each one of these fishing icons have many special talents that earn them the title of “Legend”. Our first stop is Captain Lee Parsons and his passion for the sport. Lee 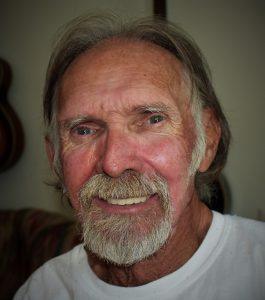 has a stellar history as an outdoorsman and especially that of a fishing guide. He’s well known for his in depth fishing tactics and strategies that have in many respects altered the way we fish along the Carolina Coast. His strong commitment to fishing conservation has earned him the respect of countless anglers. He lives life on his own terms. Most of all, he has given back to the sport that he loves so much. Proof of that was seen when he helped a rookie fishing guide with little experience break into the guide business with his knowledge and patience. That guide was me. A gesture that will never be forgotten.

The first time I saw Lee Parsons he was standing on his Boston Whaler at the Bridge Tender Marina in Wrightsville Beach, NC. He was finishing fueling his boat as I came up to the fuel dock. I knew who he was thanks to the Gottafly logo on his boat. I tied up my boat, stepped on the dock and casually walked toward him with the intention of 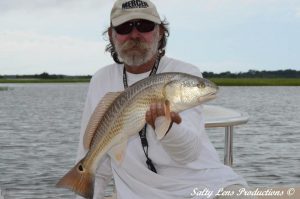 introducing myself to the man many considered the best light tackle angler in the area. I was a rookie guide and probably had far less fishing experience than I should have for a “professional fisherman”. When I got a few feet away from Lee, he turned around and look me in the eye. That’s when I felt my blood turn cold and I broke out in a freezing sweat. His piercing eyes surrounded by lines created by years of sun and exposure to the elements seemed to be looking right through me. Standing face to face with this icon of Carolina Saltwater fishing was, for a moment, terrifying. Then Lee spoke. While his voice was direct and commanding, it was also kind and sincere and he quickly made me feel at ease.

In the days and years that followed, I became good friends with Lee Parsons. He was always quick to help me learn the trade of being a fishing guide. It was tutoring that I took seriously. Beyond his instruction, I also made it a point to actually watch him fishing, but 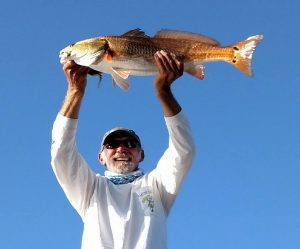 not too close. I was always impressed with his focus and what seemed to be a detailed plan for his fishing day. He never left the dock just hoping to catch fish. Instead, he left the dock knowing what he was going to fish for that day, where he would fish and what rigs and lures he would use. Once on the water, those piercing eyes I had first seen years ago were constantly scanning the water looking for the signs of feeding fish that would result in his next bite. I picked up a lot of good fishing habits from Captain Lee, probably without him ever knowing it. I also rid myself of a number of bad habits as well. Habits like running into a bait ball when fishing for Bonito. It only took one gentle scolding on the VHF radio one chilly April morning from Lee to cure that problem forever. Possibility the thing I leaned most from Captain Lees was “FOCUS”. Again, this was something you could see in eyes. It was a deep focus that was seen in all aspects of his approach to fishing which is his art, and he is a true artist. He faces the sport every day with that same focus and commitment that makes him a true angling Legend.

Lee grew up in the Hewlett’s Creek area of Wilmington, NC. He started fishing at a very young age that was prompted by his grandfather. Initially, he owned and operated a customer interior staircase  business as he continued to fish when time allowed. Starting his fishing business in 1995, Lee was one of the first light tackle guides in the Wrightsville Beach, NC area. In 1998 he and I made up half of the entire light tackle guide operations in an area that now has approximately 200 guides.

Captain Lee faces life very much like he does fishing. With focus and most of all on his terms. He recently built his own home near Topsail Island with the help of a few friends and where he now lives with his dog Fisher. He gathers with his friends for a weekly jam with Lee playing the guitar. A passion that he’s long enjoyed.

I asked Lee what the biggest changes he has seen in the sport. He told me the use of 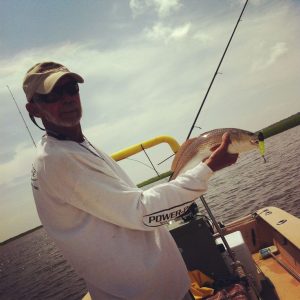 graphite for rods and braid line. I also asked him, beyond catching fishing what was the best part of being a guide. He was quick to say that it had to be the people he met along the way. Probably the most important question was what does the future hold for him. He looked at me with a big smile and said, “ I’m gonna’ slow down but never quit”. I believe that’s the answer that most of us that know him wanted to hear. We can’t imagine Coastal Carolina fishing without Captain Lee Parsons.

Captain Lee will be one of the 6 Legend instructors at the Legends of Saltwater Fishing Academy  at the Wilmington Boat Show on September 6-7. There, he will share both his passion and knowledge of the sport he loves and knows so well.