What Do Fish Really See? 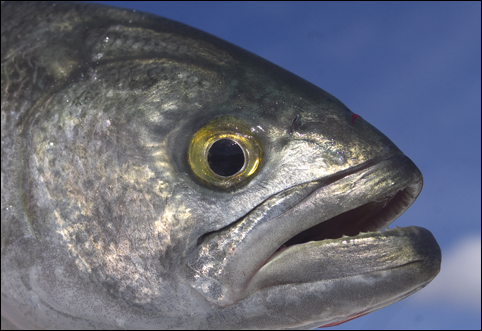 Ever wonder how a fish sees an angler’s lure? In many cases they actually see the lure, but it’s important to remember that predators also use a sense of feel and sound to zone in or their next meal. Certain parts of their body many times can feel the pressure of moving water from the irregular movements of another fish. They also respond to scent. This is why the tackle shop is lined with scented baits. And what about those baits that rattle and make noises that attract action as well? Ok, so far we’ve not mentioned a fish actually seeing a bait.) We assume that fish do see baits rather than just feeling and hearing them. This is again best proven by visiting your favorite tackle shop and seeing the countless colors, shapes and sizes of soft and hard plastics and jig heads that are all counting on a fish seeing. 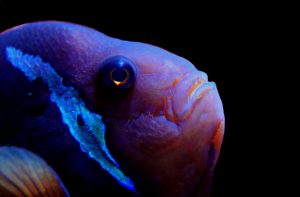 Here’s what we know. Fish’s eyes focus much like the guy’s eyes on the surface holding the rod. Reflected light enters the eye through a cornea, passes through a pupil to be focused on the retina, where cone cells and/or rod cells convert the light into electrical impulses, which the optic nerve provides to the brain to produce an image. However, there are many differences on how they process that image. Humans live in a rather consistent environment with light being rather consistent. The fish environment ranges from the bright surface to the deep dark ink blue depth. The fact is, their vision is driven by the environment they live in. Since fish process images like humans, they can see colors much like we do. The eyes of many fish species consist of the same parts as ours and therefore react the same way as our eyes. However, there are some fish species that lack the number of cone cells or any at all that makes it harder or nearly impossible to see color.

It is thought that the deep water fish may actually have some level of cone cells that would enable them to see color, but can’t due to the low level of light. Black and blue lures are widely considered the only colors they can see in places like the deeper reefs and wrecks. This is due to the longer wavelengths of the darker colors and how they can better penetrate the lower light. Some fish even come equipped with their own “flashlight”.  Many of the deeper dwellers are found with glowing eyes. They have a special retroreflective layer known as the tapetum lucidum, which shines incoming light back through the retina in low-light conditions, increasing the light available to photoreceptors and improving night vision. It’s thought however, that while fish can have very sharp vision, the ability to process what they see is not as keen as that of the human.

The long and short of it is that yes, fish can see. But, there are a lot of facts that determine just how well. While we as humans have a fairly consistent ability to see world wide, and we are made pretty much alike when it comes to eyes and brain function. A fish lives in environments that are extremely varied and complex. The same is true for their brains and eyes. In most cases those factors are driven by the environment. In any event, watch out if you can see them, they can probably see you. Keep asking the guys at the tackle shop what lure you need this week.