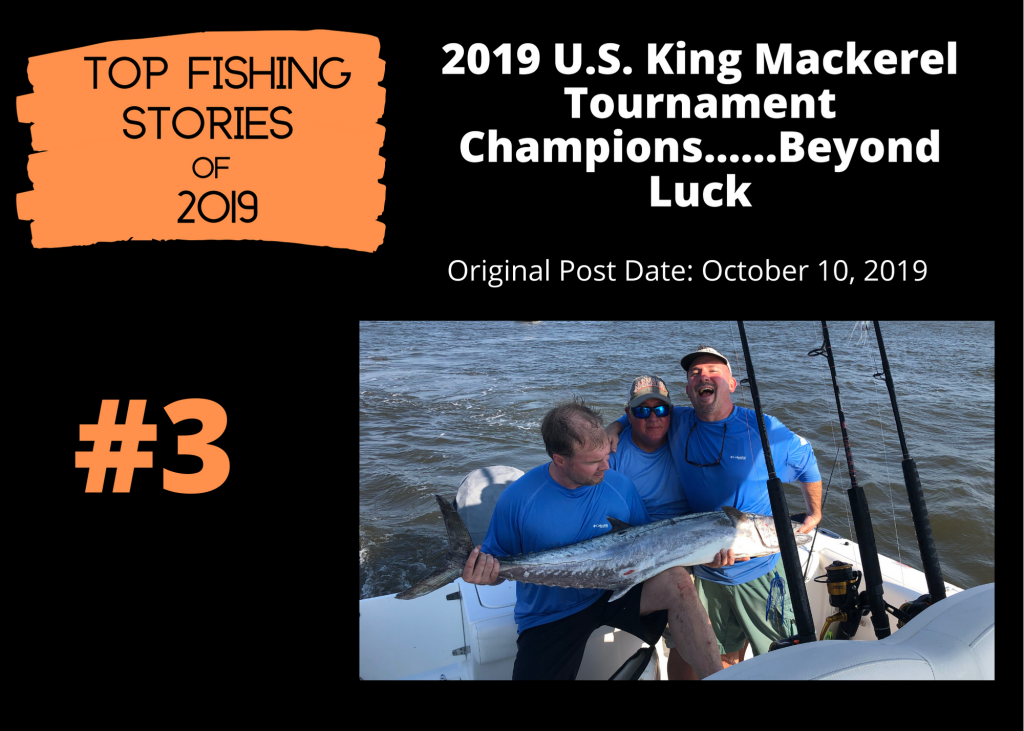 When Bob Carr and the fishing team of the “Nauti-Edition III” left the boat ramp On Friday, October 4th, they were not really sure what was ahead of them. The days and weeks prior to the 2019 U.S. Open King Mackerel Tournament took work to prepare for what has now become one of the biggest saltwater fishing tournaments in America. This team is a bit different than most teams. Rather than many of their competitors that enjoy corporate sponsors that aid in the costly expense of competitive saltwater fishing, the team of “Nauti-Edition III” all share in the cost of fishing the U.S. Open. Bob Carr and son, Joshua as well as Dave Clem and Jeffery Masnick make up the team. While the group occasionally fish King tournaments, they really don’t consider themselves fishing competitors at the same level of many of the Southern Kingfish Association circuit anglers. Instead, Bob and his team are just good friends with a passion for fishing and a dream of winning the U.S. Open someday.

The dream monetarily turned into a nightmare on the Thursday prior to the first day of the U.S. Open. Bob was giving the boat a final check over when he found that the GPS had issues linking up. It was a sight that brought panic at the thought of fishing without a working GPS. He contacted his boat repair company and the service tech soon appeared. After a quick download update, the GPS was back in business and so was “Team Nauti-Edition III”. 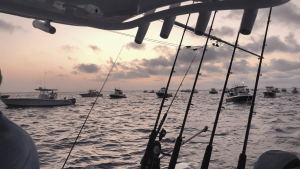 On Friday morning as the sun rose over the Cape Fear coast, the friends headed out the inlet with over 200 anglers looking for bait and more importantly, hoping to hook the biggest King Mackerel over the next 2 days. The U.S Open had begun. Images and sounds of the 200+ boats with engines screaming in close proximity was both breathtaking and intimidating even to the most experienced fisherman. Bob and his crew first headed out to Yaupon Reef in search of bait and then began fishing. With 3-4 seas and clear water, hopes were high. At 1:35pm Bob announced to the team that he was heading to a spot in the Cape Fear river channel. It was a spot they had enjoyed success with and hoping today was the day the spot would again pay off. However, he had not been there for nearly 10 years and in some respect, it was taking a chance by leaving the pack of other competitors for a place he had not fished for nearly a decade. Once getting there, the bite was active, but largely break offs with the sizes unknown. Then at 3:05p.m.  it happened. The port side reel started screaming and the rod started bouncing with line peeling off at a high of speed. Jeff Masnick quickly grabbed the smoking rod and the black and gold Penn Squall reel and moved to the front of the boat and started working the drag to make sure the line remained snug, but not so tight that it would break the line. Bob maneuvered the boat into fighting position with the bow heading dead at the fish of unknown size. As Jeff was able to recover line, Dave Clem grabbed the gaff and got into position. After a 20 minute fight they saw color both of the fish and the pink flash of the Blue Water Candy pink Hot Shot rig. A brief scare came when the fish darted under the boat at the last minute, a maneuver causing the entire crew to hold their breath for a few minutes.  Soon the big King was safely on the deck of the “Nauti-Edition III”. At first look the crew thought they had a fish that would be in the winnings, but not sure where. Minutes later when the breathing started to get back to normal, the fish was stowed and Bob turned the boat towards Southport Marina and shoved the throttles forward hoping to make the weigh in under the clock. During that few minutes heading to the scales gave each one of the crew time to think about what just happened and better yet what may happen yet.

Once to the scales they quickly realized that they were in fact the leaders of the 2019 U.S. Open King Mackerel Tournament, if only for a brief time. At that very moment as they looked at the 36.6 pound King Mackerel hanging on the scale, the 4 friends were on top of the angling mountain and it was a feeling they’ll never forget.  However, there still remained another day of fishing before the Open champion would be crowned. 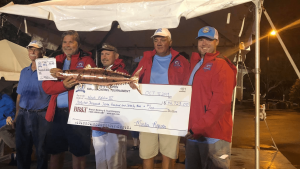 The next day proved to be just as the weather forecasters had predicted. The conditions had deteriorated significantly. The sun rose on Saturday to windy conditions with rough seas that made water clarity poor. Still it was a day to fish and fish they did. Many boats gave up early while others tried in vane to land the winning King. None did and Bob Carr, his son, Joshua, Dave Clem and Jeffery Masnick became the 2019 U.S. Open King Mackerel Tournament Champions. After enjoying a standing ovation while eating at the famed Southport’s Provision Company restaurant the group held up their winning catch for dozens of pictures while their families and other Open competitors looked on. Then it was time to go home.

Thinking that the celebration was over the winners relaxed with a few beers while looking back on the event that earned them a level of angling fame and a small fortune of $42,723.00. And just when they thought it couldn’t get any better….it did. Gradually friends and neighbors started to arrive, coming to congratulate the winners. Their winners! The night turned into a celebration for the guys that were lucky enough to win the 2019 U.S. Open King Mackerel Tournament. Or was it really luck? Was it luck that Bob Carr found an issue with his GPS at the last minute and was able to get it repaired? Was it luck that they decided to got to a fishing spot they had not been to in over 10 years and big King was waiting on them? And was it luck that they caught the winning fish on the day before conditions turned nasty? Was it luck or destiny? I think we all know.

I don’t think it was luck that 4 good friends took a long shot and won. It was simply supposed to happen. It was their time and what a time it was. I love seeing an underdog come out ahead and these 4 underdogs did it with humility and class. They set a great example of not being afraid to compete with the best in the business. They had the guts and they won!

I hope they will continue to fish the U.S. Open each year. I really hope they’ll celebrate their 2019 win each year at this time to remind themselves and the rest of us that dreams really do come true!