The Pier Fisherman…..If Their Eyes Could Talk? 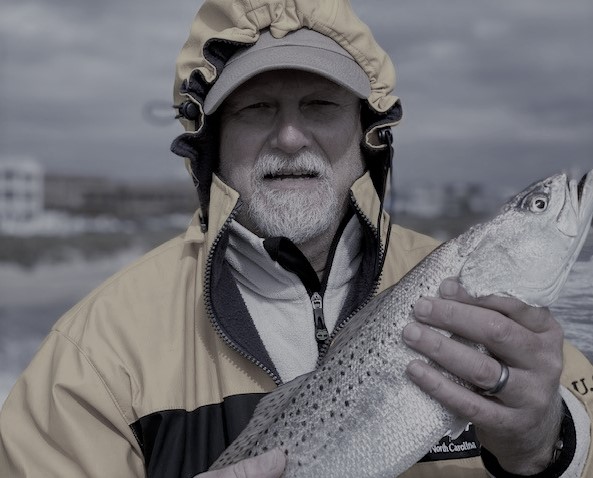 While having fished in many parts of America as well as many species, it didn’t take long to realize that there is a wide range of differences in the people that saltwater fish. Those difference can be seen in their eyes. In the eyes of the offshore sportfishing angler you can see serious determination that is commonly followed by profanity. The eyes of the inshore fisherman you will commonly see focus along with patience that is only broken when the fish attacks the bait and the game begins. The eyes of a surf fisherman you can find the 1000 yard that is needed to follow the line far out beyond the breakers. However,  the eyes of a pier fisherman to me appear to be very different and so do the people. This was a lesson I learned on a cool, overcast blustery day on an old, but famous fishing pier in Kure Beach, NC. 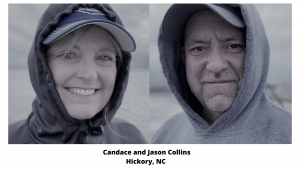 Walking out onto the Kure Beach pier on that Saturday morning was challenge in itself. With the days of summer just a few days behind us the shock of cold air and winds proved to be a stark wake up call that winter was coming. The grey overcast sky seemed to be the same shade of grey as the weathered boards of the pier’s decking. The ocean was light green with white caps all across the surface. Even though it was an unattractive day, the pier was filled with anglers wrapped up in parkas and sweatshirts, all facing the rolling waves watching their lines and rod tips while waiting for the next fish to bite. The deck was lined with folding chairs made of canvas, rolling coolers and fold up wagons that held their tackle, bait and food. Most of the fishermen ignored our passing, only to watch their rod tips for a sign of a fish. They looked out over the water almost in a trance. 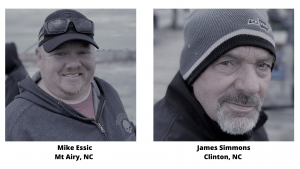 As we walked up the pier, I finally got the nerve to ask a lady if I could take her picture and ask her a few questions for our story. Her hood on her jacket covered most of her face making it hard for me to read here expression. After a moment she adjusted the hood and I saw that she had a broad and welcoming smile. Timidly, she allowed me to snap my pictures while tell be about herself. Her name was Candace Collins and she and her husband Jason come down from Hickory, NC every November to fish. It was interesting to learn that she came from the mountains of North Carolina to frequently fish off the Kure Beach pier. As we continue our walk down the pier we stopped and had other brief, but interesting conversations with the other anglers. Each had a different story, but each still similar in their own way.

Through their eyes you could see a common bond. They were there to relax. To spend the day near the water in a place that brought them a sense of both solitude and appreciation for what the pier environment had to offer. They were for the most part quiet and focused. In every case the anglers we spoke with would always break out in an inviting smile and then kindly share their story. As they told that story a smile would gradually come across their face in spite of the cold winds. Always keeping their eyes on their rods that stood attention along the pier railing, they shared their love of fishing reason for being there. 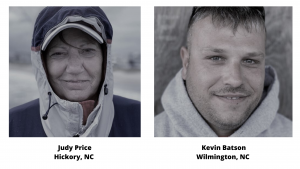 It was interesting to learn that most came from rather long distances. Few were from the coast. They ranged from a retired school teacher and his wife coming from Bluefield WV 4 to 5 times per year to fire protection inspector from Mount Airy, NC that has been coming to fish the pier at Kure Beach for nearly 20 years and others with similar backgrounds and stories. They all shared their long distance love of saltwater fishing in a place that many of us take for granted. It’s the kind of place that they regret leaving and dream about returning to. However, while they’re there, the world becomes a world where life is easy and backdrop is breathtaking. They don’t take it for granted like many of us do. Instead, it’s a passion that’s developed over years and many times as old as the planks of the pier itself. They will likely never reel in a Marlin or Sailfish. They’re not going to know what it feels like to fight a Wahoo or Tuna. But what they will always know is the wonderful feeling of sitting on an old fishing pier with a friend, spouse, son or daughter. To them it’s the greatest place in the world, and I know this because…..I can see it in their eyes. 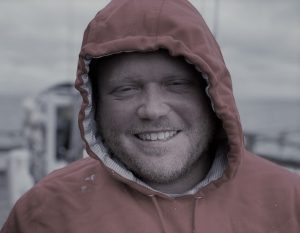