Understanding the Magic and Mysteries of the Gulfstream 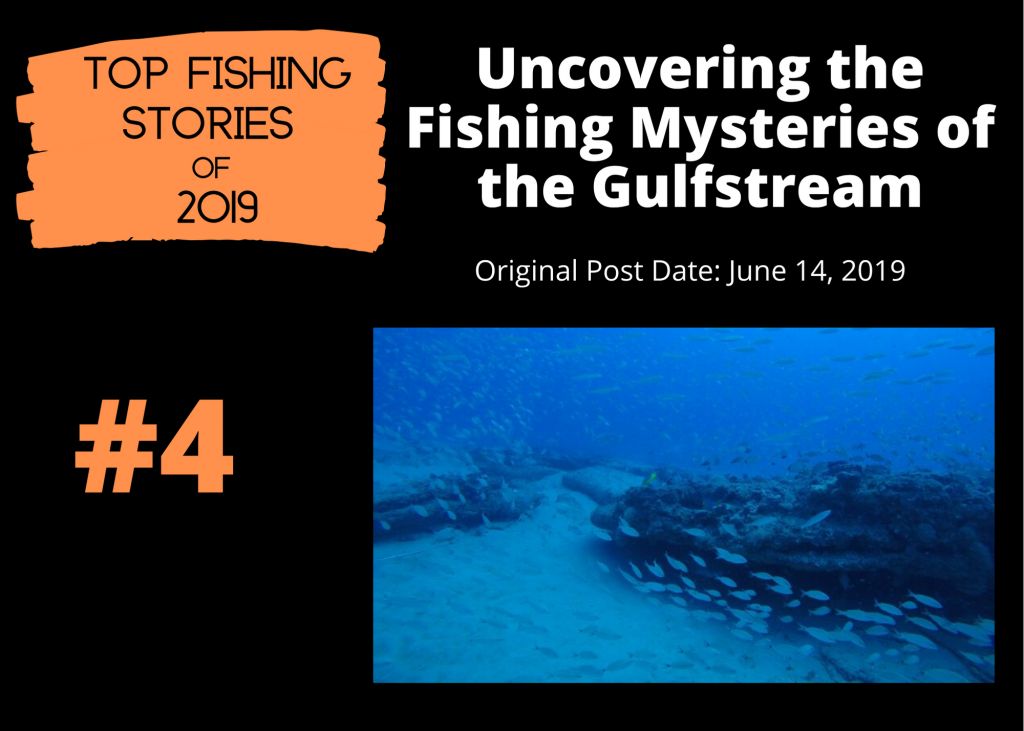 The article below may be one of the best descriptions of the Gulfstream and its fishing you’ll ever find. It’s based on years of research as well as fishing experience by a Carolina fishing guide, author and map designer, Captain Chip Berry.

Chip is the founder of Maps Unique, one of the most well know fishing map companies in America today. He resides on the Carolina Coast and has fished their waters his entire life. While it’s somewhat long, it was impossible to tell the full story in any less words. This is must read for all fisherman and especially the offshore fisherman.

The Gulfstream, originating in south Florida is the largest river current in the world. It has 26 times the amount of flow than all the world’s rivers combined!!! The Gulfstream is also the fastest moving of all the world’s surface currents. Due to the rotation of the earth and the trade and westerlies winds, these influences push warm blue water westward and create a clockwise gyre in the Atlantic basin.. As this flow reaches the Caribbean, part goes into the Gulf of Mexico creating a continuous clockwise gyre eventually spilling out between Cuba and the Florida Keys. This is referred to as the “Loop Current” and is fished in the Gulf of Mexico the same we do the Gulfstream on the east coast. The other Antilles drift current is sandwiched between south Florida and the Bahama’s. When the Loop Current meets the westerly drift current it is now considered the “Gulfstream” and has a greatly enhanced flow that continually goes northward at 4 to 6 knots.

About Cape Canaveral, the stream becomes a wild meandering current as it heads northward to above Cape Hatteras, and sometime beyond up in canyon country off Maryland and New Jersey. There is little structure or land mass off the southeast coast to impede its wildness so it can vary considerably as to where it actually is located and its geography at any particular time. The Stream is constrained to a narrow band on the west side of the Atlantic Basin due to the earth’s rotation. It generally is about 35 miles across but throws out loop eddies or current rings to both the west and east sides of the current. These eddies often pinch off from the main flow and can drift inland many miles influencing and creating water regimes into upper shelf shallow waters. It is estimated that the Stream produces an average of 22 very large significant warm core eddy rings and 35 cold water eddies every year. This is very significant to the southeast offshore angler. These eddies can last for many days with some being 50 miles or larger.

But for a majority of times for the NC, SC, and GA fisherman, the western wall of the stream hugs the 30-100 fathom break. Sometimes it spills onto the shallow inner shelf yet at other times the western wall may be twenty miles offshore of the break. The current greatly enhances life along our shelf terraces and bathes the live bottom habitat with flow that supports our snapper-grouper fishery and brings with it the hunting pelagic gamefish we cherish such as Blue and White Marlin, Sailfish Wahoo, Tuna, Mahi and Kingfish. These guys know how to hunt!!

So, who discovered the Gulfstream and named it? Believe it or not, it was our own patriot and scientist, Benjamin Franklin. Yes, Ben Franklin was the Post Master General for the US — an important position for mail and trade in those days. He noticed that ships 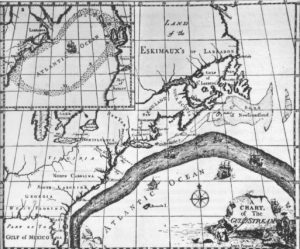 The 1st map of the Gulfstream produced by Benjamin Franklin in the 1770’s. Library of Congress, 1786.

leaving the Northeast harbors of New York, Philadelphia, etc. we’re arriving much quicker to the England Mother ports by traveling on a more northerly tract. Likewise, he noticed that ships headed on a more southerly course were taking a much longer time to arrive. So Franklin, in his great wisdom, proposed that a very strong constant current heading north must be responsible. With His data compilation, he produced the very 1st map of the Gulfstream Current published in 1769 which is accurate to this day.

Perhaps, Franklin did not understand the significance that the Gulfstream has to fisheries. But rest is assured; it is one of the most important influences to successful offshore angling along the southeast coast. The Stream is the habitat that attracts the biological domain, the food chain and is the preferred habitat for Blue Water species. They hunt the stream and its geography and congregate in key locations where the current resides and bait congregates.

To be successful offshore, the angler needs to consult the latest satellite imagery to see where the water regimes reside. Satellite sea surface temperature data is free, but there are commercial services that provide enhanced data services looking at sea surface temperature, water clarity, thermoclines, and timing of Gulfstream movement. I use a commercial firm myself.

So, what do you look for to find fish? The real key is to find the edges that separate current boundaries. These edges can be along the western wall of the Gulfstream, eddies and ring 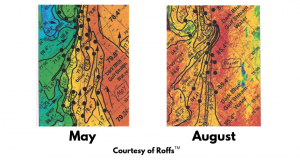 pockets broken –off near the stream, or boundaries in the main axis of the Stream. But it is important to note that inshore of the stream are significant boundaries that commonly occur that may not have any relation to the stream directly. These boundaries are very significant. Satellite imagery is the only way to know for sure where these are. Many of these regions will have the same characteristics such as temp and water color change and the presence of Sargasso weed lines.

So, whenever you encounter a water regime boundary you are likely to find temperature breaks, water clarity change, thermoclines and the presence of Sargasso weed lines. The longer these conditions are present, the better the fishing. When boundaries are present in the general vicinity for 2 to 4 days, this gives the opportunity for bait (flying fish, squid, and weed lines) to congregate. Even in the hot summer days, a 1-2 degree temperature change can be significant. Gamefish are fast swimmers and hunt these boundaries often traveling 30 miles a day hunting  food along these boundaries and pockets. Boundaries come and go as do weed lines form and others dissipate. It is certainly a dynamic environment and gamefish are well adapted to traveling in this rapid changing environment. Some edges are very well defined over short distances while other boundaries, mostly comprised of mixed blue water, may take a few miles to transition from one distinct water mass to another. I do like mixed blue water areas too, especially when trolling and are constantly hitting pockets of deep cobalt blue water streaks and pockets within less blue and dirtier looking water. Often, your trolling wake will let you know. Weed lines are also extremely important. They are complete habitats in its own right providing food, cover, and the general location of water mass intersections. Mahi always seem to find a good weed line!!

There are two interesting features along the east coast that does indeed influence the main core of the stream direction that deserve discussion. The 1st feature is Southeast of Charleston in deep water off the 100 fathom shelf break. It is a huge east to west oriented ridge referred to as the “Charleston Bump”. It is a series of coral seamounts towering hundreds of feet off the bottom. The Bump is easily seen and named on the Maps Unique “Charleston” map. This feature tends to deflect the stream, at times but not always, to the east before meandering back northwestward to come back along the 100 fathom break near or just north of Cape Fear. Sometimes the momentum in the stream will push its way over the Bump and cover the area of the Georgetown Hole, The Winyah Scarp, and the Swansboro Hole with incredible spectacular fishing. Researchers that have studied “The Bump” suggest that the nutrient rich upwelling that occurs there plays a significant role in 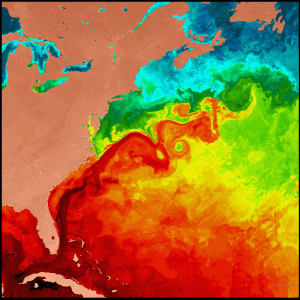 Southeast US view of the Gulfstream as seen from NOAA satellite sensor. Note the darker color blue water and its Influence on the mid shelf waters. Also note the eddy rings extending from the main axis of the current.

the life history of many species including the Blue Marlin and the Gag Grouper. It creates a counter clockwise gyre mixing Gulf water with nutrient rich water. The 2nd feature influencing the Gulfstream occurs north of Hatteras up in Canyon Country, where the colder Labrador Current coming down from the north pushes the current eastward and eventually towards Western Europe. However, it is fairly common in the summer months for the Gulfstream to push well further northward of Hatteras before making that easterly turn. Often, these conditions will kick off large eddies off to each side of the currents axis as the Gulfstream begins to split into several distinct currents. Anglers fishing the Baltimore, Poorman’s, Norfolk, etc. canyon country can expect spectacular blue water fishing compliments of the Gulfstream.

So, bottom line is: 1) know your water, 2) Know your prime bottom habitat that lies under these regions, and 3) Hunt and Hunt. Remember that fish are hunting the exact same habitat that you are looking to find!!

One of God’s greatest blessings was giving us the gift of the Gulfstream and its associated life forms off the southeastern US. Enjoy the ride!!!. 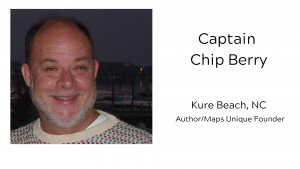