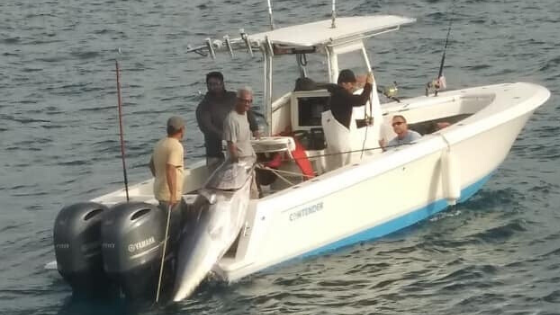 On a chilly Saturday off Oak Island, North Carolina the water opened up and the large head of a giant Blue Fin tuna came out to take the bait behind a 30′ Contender. Two hours later Captain Wally Trayah had the big fish in the boat. The size of the tuna coming onto the stern of the Contender made the what was otherwise a large boat look tiny. It’s December and that means it’s Blue-Fin time on the Carolina Coast. 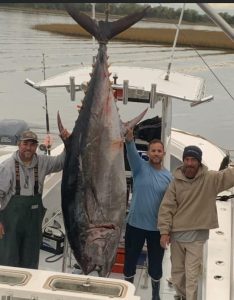 The story is told that for many years that catching a Blue-Fin tuna just off the coast of the Carolina’s was missed. Before the development of good fish finders, commercial and recreational anglers alike actually motored over large schools of the tuna that were chasing menhaden bait balls within sight of the beach. Once this was discovered it was “game on” for the “blue beast.” The craze first started with the commercial boats and then the recreational sport fishing boats. Today, the giants are being caught in center consoles and other smaller boats. While catching a Blue-fin in a smaller boat is a great experience, it can be dangerous as well. Considering that your fighting a sometimes 800+ pound fish and then dragging it into what is many times an undersized vessel, there are substantial risk. It was even successfully tried in a Kayak in 2009 off Cape Cod by a guy named Dave Lamoureux when he caught a 156 Blue-fin unassisted. Keep in mind he was fishing in waters well known for being infested with Great White sharks.

The Sushi craze of the mid-90’s turned the Blue-fin from cat food to big bucks on the dinner table. This also changed the way anglers saw the big fish. Before we knew it was a target fish for commercial fisherman in what had been slow winter months and a new adventure for recreational fishermen.  I caught a Blue-Fin a number of years ago as novice fisherman. I was fishing on a 42′ sportfishing boat with 4 other experienced anglers. I was a great experience that I’ll always remember and there’s a picture of the tagged and released fish on my wall to prove it. But…..I never want to do it again. One was enough. The next day I could barely get out of bed due to  my aches and pains. In the years to come, I shared my story with many people about catching a 400 pound Blue-Fin tuna. At the same time, I’ll bet you even money there’s was Blue-Fin swimming around the Atlantic with a sore mouth bragging to the other tuna about kicking a fat guys ass off the Carolina coast back in 1995.