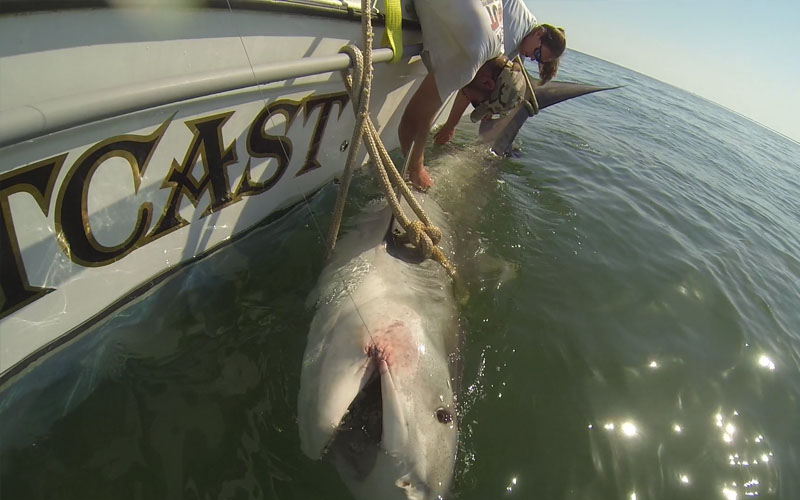 Captain Chip Michalove rolls out of bed at 4:00 a.m. on a cold January morning like he does many winter mornings. He climbs into his truck and heads to the marina for a day of fishing. When he gets there, he fires up the engines of his 28’ Glacier Bay catamaran and starts preparing for the day ahead. He loads rods and reels as well as bait and other gear and supplies for this trip. It’s a process that every charter captain goes through. It’s all pretty basic except for one thing. Chip and his crew are heading this day to catch a 2,800 pound Great White Shark. You see….that’s what Capt. Chip does. He specializes in shark fishing and especially the big and dangerous ones.

Based in Hilton Head, South Carolina, this Kentucky native is not what you would expect from a shark fisherman. Instead of the calloused foul mouth Quint in the movie “Jaws”, Chip resembles someone who you would be more likely to find selling real estate or working as a college professor rather than a guy stalking the meanest creatures on earth. He is a polished and polite guy that is filled with personality. You’ll quickly notice his outgoing ways and passion for shark fishing. It’s a passion that he’s carried for nearly forty years. 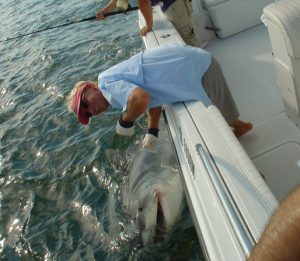 His shark hunting process starts the day prior when he spends the entire day preparing his tackle and bait for the next day’s trip. Due to the nature and size of the target, this requires a high level of detail and attention. The rigs have to be crimped with precision. Each haywire twist has to be done to perfection and rods and reels have to be inspected for any potential problems. A one ton plus creature with large teeth and a bad attitude on your line is not a good time to have a reel issue. Chip is especially careful to make the rigs include the right hooks. He uses hooks that are not made of stainless steel. This allows the hook to quickly dissolve in the shark’s mouth in a matter of a few days rather than remain in the shark for a long period of time to potentially cause the fish health issues. This is key to Chip’s fishing approach. The preservation of the shark is his priority. If a shark is aggressive near the boat or during the tagging process, Chip and his crew quickly release the shark to avoid its injury due hitting the prop or from shock.

Another factor that makes fishing for Great Whites even more danger is that it takes place in the cold months of winter. Capt. Chip and his crew are fighting the elements and a large aggressive fish. The weather makes it necessary to wear heavy clothing, and that makes fighting the fish even more challenging.

Finding a fish this size is also a challenge. You may think that Chip uses a tracking device that we often hear off, but that’s not the case. He depends on the same tactics and factors that every fisherman depends on. Calculating the water clarity and temperature is a factor as he seeks bait like turtles that will attract the Great Whites, and watches for birds that indicate activity of other bait. 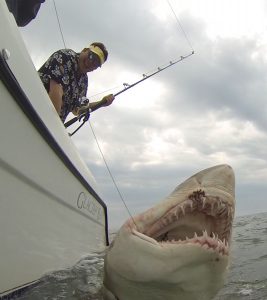 Once the fishing spot is determined, Chip and his crew will troll with either 2 lines or just one if they are specifically looking for Great Whites. Once hooked up, they have to actually follow the shark allowing the boat to slow the fish down and wear him out prior to tagging. While many anglers “back down” on the large fish they catch, Chip opts to fight from the bow to avoid large amounts of water coming into the boat. Once the fish gets to the boat the biggest danger arrives. The tagging process includes the handling of the fishing line of a 1 ton fish while it’s being tagged. This heart stopping event has to be done in minutes to avoid injuring the shark or those tagging it. It’s the time when Chip and his crew come face to face and only inches away from the most fierce creature on earth. It requires focus and experience.

Capt. Chip is passionate about shark fishing. You can see it in his face and hear it in his voice. More importantly, he’s passionate about the safety and preservation of the shark and especially about the ones he catches. In recent years he’s enjoyed countless articles and documentaries on shark fishing exploits, and his feelings toward their preservation is a large part of the story. So, if you want to meet one of, or even fish with one of a true sportsman, head over to Hilton Head, South Carolina, and look for the least likely guy to be a Great White Shark fisherman and that would probably be Chip. It will be a day that you will never forget.