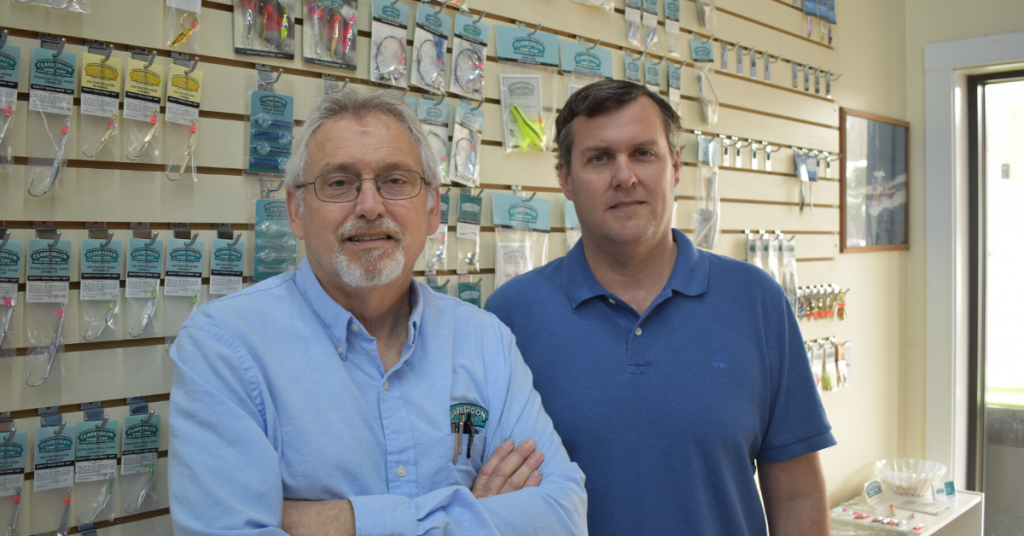 I recently got the opportunity to visit the Clarkspoon facility in Morehead City, NC. It was not only a great walk down memory lane for me, it was also a chance to see one of the oldest and most treasured lure companies in America and meet those that have spent most of their lives making it that way.

As a fishing guide back in the 90’s, fishing for Spanish Mackerel and Blue Fish was my bread and butter tactic. I would set out 1 long line with a shorter planer line just out of the prop wash with my PENN 320 GTI reels mounted on my $20 rods. At the end of those lines was always a small gold and silver Clarkspoon. I have no recollection of catching a Spanish Mackerel that didn’t have one of these shiny lures hanging out of their mouth. Fishing with Clarkspoons back then left little to chance and nothing to doubt.

As I pulled off Hwy 70 just outside Morehead City onto Little Nine Road, I started looking for the Clarkspoon plant. Little Nine Road is only a few hundred feet long and is home to great names like Star Rods, Sea Striker and Big Rock Sports, in addition to Clarkspoon. I located the building by spotting the small Clarkspoon’s logo on the glass entry doors. Once parked, I entered the facility to begin one of the most interesting and memorable story interviews I will likely ever do. While I expected to find large numbers of people manning machines and computer monitors, I instead was warmly greeted by Al Brister, co-owner of Clarkspoon. Al guided me to his nearby office where we proceeded to have a lengthy chat about topics on everything from the future of tackle shops, car racing to his many years at the Clarkspoon plant and his life before.

I was taken on a tour of the facility that was astounding. Unlike the techno-driven operation that many would expect, the operation was largely made of older processes and even older equipment. Now, this is where the really interesting part begins. Most of the 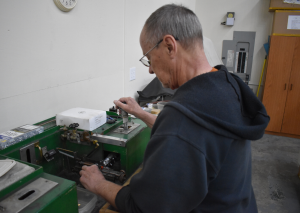 current production done in  the  Clarkspoon facility is done with the original equipment which goes back to the original owner and namesake, James E. Clark. The company was based in St. Petersburg, FL and began in 1927. Clark and his family lived in an apartment above their machine shop. In March of 1999, Al Brister and 2 other partners purchased Clarkspoon from the Clark family and moved it to Morehead City, where it has successfully operated since. On my tour, I learned that the original equipment has survived thanks to great maintenance and care combined with the design and excellent craftsmanship of the founder, James Clark who was by trade a machinist. These machines continue to create the unusual assembly of the unique Clarkspoon product such as the twisted loop at the top of the lure.

Even more interesting was the employees of the company. There are only 5 and each is 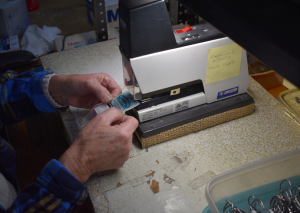 over 50 years old except co-owner Christian Bedworth. Nearly everyone has been at Clarkspoon for many years. It was clear that each had a high level of experience but also had an even higher level of passion for the company. Their attention to detail was unparalleled. Jimmy Ruggles started with the company very shortly after they arrived in Morehead City. He comes into work each morning before most of us are even thinking about waking up. His detailed approach and love for his job have kept the product of the Clarkspoon operation both organized and efficient. The rest of the staff are equally as skilled in their areas.

Clarkspoon has come from 16 products in 1999 when Al Brister and his partners bought the company, to over 200 products today and with more coming. Since that time the company has never missed a day of production. Not even when they moved the equipment from St. Petersburg, Florida to Morehead City. Instead of closing, they moved over a weekend and had production restored on Monday.

My tour was concluded with being introduced to the new products the company has recently rolled out. We also talked about the future of the fishing industry that is bright for the owners and employees of Clarkspoon. As I was leaving, I was given a gift box of lures, hats and other cool items. On the 2 hour drive back, I reflected on my visit and the many good thoughts coming to mind. I was impressed with the pride and passion that the people of Clarkspoon had for their product and their history. It’s a perspective not seen in many companies today. This group proves that commitment to quality and appreciation of the legacy that the company has built over the years has far-reaching benefits that costly technology can never offer. The fact is, the nearly 100-year old machines work because they were built by a true craftsman (John Clark) and they were built to last. Based on what I saw that warm March day, it’s the same with the Clarkspoon company today. It will continue to weather the coming years in the fishing industry, especially with owners like Al Brister and Christian Bedworth carriyng on this great name. Their product has been in the tackle bags of anglers for nearly 100 years and will likely be there another 100 years. They have already left a solid mark in our fishing industry that will never be removed. 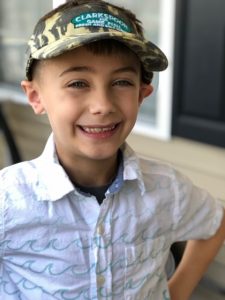 When I got back home, I took my grandson a few of the spoons to put in his tackle box and told him how I fished with them for many years. (His tackle box gets more crowded every week.) I explained to him that these lures were special to me because of the many fish I caught using them over those years. I also told him about the special people that made the lures and their passion for making them.  His response was for me to be sure and tell those special people “Thank You”.