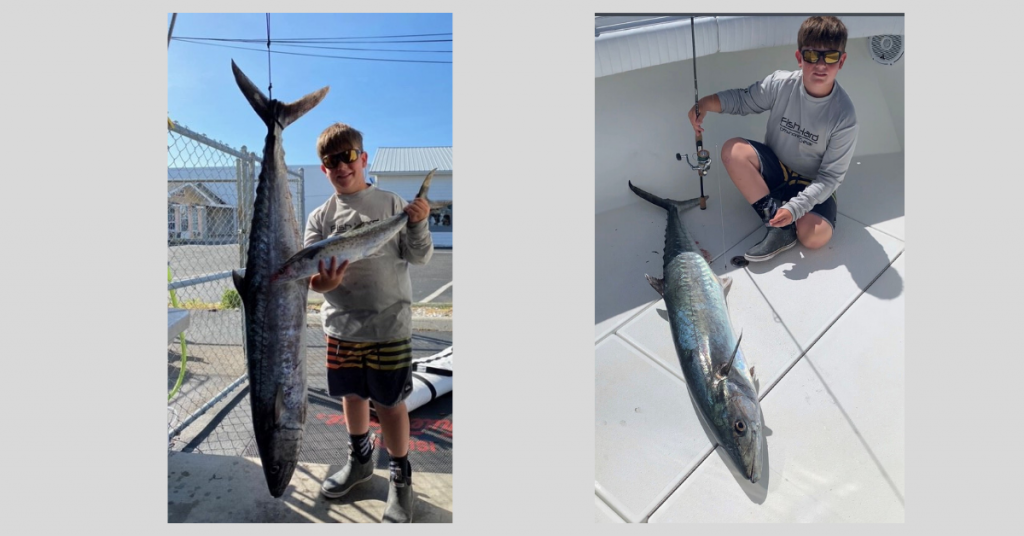 Most of us approach fishing not really knowing what the future holds. We enter the sport not sure if we are short timer’s or will be a fishing fanatic for the rest of our lives, or somewhere in between. A young man from Carolina Beach, NC seems to have already figured out his fishing past. His name is Carson Shingleton and he’s just 10 years old.

A big chapter in his story was made in recent days just off of Carolina Beach when Carson hooked, fought, and brought in a 42 pound King Mackerel. Now this is when the story gets better. The fact is that he and his dad Chad, a local area homebuilder and offshore fishing competitor, were live bait fishing for Spanish Mackerel on light tackle and I do mean “light tackle”. With dad running the boat, Carson was casting into pods of Spanish when he noticed the water swirling. Chad told Carson to cast his lure in that direction and then the day got interesting! The big King Mackerel took the bait and Carson calmly set the hook. What they didn’t know was he had come into the sights of 2 experienced King fishermen. That’s right, while his dad is a busy competitor on multiple King fishing circuits, Carson commonly fishes with him and therefore is becoming an experienced angler in his own right.

The 20 plus minute fight had several challenges. The event came with it a 42 pound angry King Mackerel hooked up on a light tackle spinning reel loaded with only 12 pound test line in the hands of a 4th grader. This meant the fish was nearly as big as the young angler with tackle that was so undersized, that it’s like hunting an angry bear with a BB gun. Believe me folks, you can’t make this stuff up! 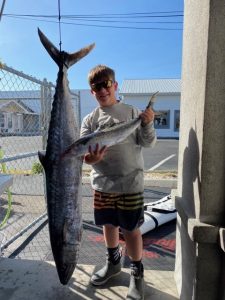 Carson soon realized that the biggest problem he had to confront was the line spooling off at a terrifying rate. That’s when his dad quickly put the boat in gear and started following the fishing. At times Chad had to get the boat up on plan to allow Carson to recover line and not lose the fish. After several minutes of tiring cranking from the front of a speeding center console, they were close enough to hopefully boat the fish. Chad rushed to grab the gaff with Carson maintaining control of the drag, making sure not to break the line. Bumping the boat in gear one last time, Chad successfully stretched to gaff the big King and bring him in the boat. The father and son team had beat the fishing odds which were big odds for most fisherman, but to these two it was nothing more than a “fair fight”.

Laying in bed later that night I kept thinking about what a great experience that had to be. It will be unforgettable for me and I wasn’t even there. It was a great story on so many levels. A young man defying all logic to land a fish known for their ferociousness and ability to escape capture. It’s also a great story of a father and son on an ordinary fishing trip that turns into the trip of a lifetime. Let’s not forget the teamwork between the two that made it possible to bring the fish to and in the boat and the bond it represents. Let’s not forget, it’s about a young man (not a kid) that displayed character and determination. A trait that too many times is absent in today’s youth.

Carson, I want to be just like you when I grow up and learn to be a great fisherman.

I want to thank Captain Dennis Barbour, one of our Coastal Carolina Fisherman Legends of Saltwater Fishing, for connecting me with this extrodinary family.