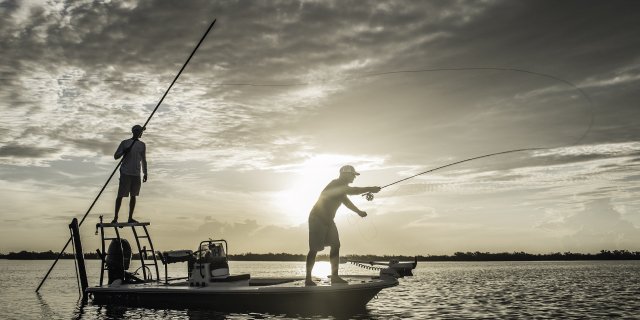 With a growing number of flats boats and fisherman getting into inshore fishing, I thought I would discuss “Flats Etiquette.” When fishing shallow waters, it is important to give another angler enough space to pursue the fish they are targeting. First, let me explain what a flat is. A flat is a shallow water area usually out of the current that fish frequent to feed. Flats exist in creeks, rivers, bays, off the Intracoastal Waterway, and the marshy areas off of each of these. I commonly fish “flats” that are less than 3 feet at high tide. 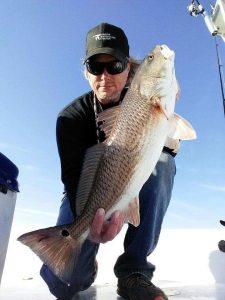 Since I live in Southeastern NC, I have to deal with a different tide every six hours; we have semi-diurnal tides along the east coast. I am an avid Redfish angler and enjoy sight fishing for these fish all over the South Atlantic and Gulf Coast. Unlike fishing on the bank, a pier, a jetty/rocks, or deep-water lakes and rivers, it is necessary to give another angler some space when fishing shallow waters. Most of this should be common sense, but people lose their minds when they see an angler hooked up as they ride by in their boats. The proper thing to do is keep driving and go to an area you had already set out to fish. Although I don’t condone this activity, if you feel you must fish the same area you saw the angler hooked up to a fish, do it after he leaves the area. Inshore fishing tournaments have rules pertaining to fishing close to other anglers and even non-competing anglers. Most Redfish tournaments don’t allow a competitor to fish within 60-100 yards of another competing angler. They also stipulate that you can’t fish within 100 yards of a non-competing angler fishing with live bait or chumming. The way I approach these rules is a common-sense approach. If someone is fishing a small shallow area, I usually move on to another area. If the area is a community hole such as a waterway flat or bigger bay, I will give the angler 100 yards or more. If you can hit another angler’s boat with your lure, you are too close. The shallower area you are fishing, the more room you need to give an angler. Fish, especially Redfish are very spooky in clear shallow water. I have had Redfish spook 100 yards from my boat as my push pole ticked an oyster shell while poling. Today it is hard to find an inshore boat that doesn’t have a trolling motor. Trolling motors scare fish on the flats a long way off. When fishing a flat and another boat is fishing that same flat, make sure you use your trolling motor as little as possible as to not scare the fish. I use my trolling motor mainly for boat position along with my power pole. Drifting into fish is the best way to fish shallow flats with success. If someone beats you to an area you had scouted or normally fish and you have no option but to fish that area, make sure you fall in well behind that angler as he is moving away from you. If you are fishing a long straight bank and know where those fish are going to move once they get pressured, you can go and wait in that area for the fish to come to you. Also, remember to shut your big motor down well in advance of positioning your boat on the flat. As a tournament angler I have had to work with a few anglers over the years as we ended up fishing the same flat on game day. This rarely happens but when it has, most anglers have worked with me and we made the best of it. As more people enter the inshore saltwater game, it is important to give anglers more space and try to locate fish in other areas. The immediate area I fish has very few inshore flats to fish and most areas are visible from the waterway. With boat traffic being a constant in the waterway and so many anglers trying to pursue the same fish, eventually boats are going to show up to the fish you found and once had to yourself. The biggest problem flats anglers have faced over the past 15 years is the internet. Sadly, a lot of anglers have posted their grip and grin photos with landmarks that easily identify the location they are fishing. This has led the “cyber anglers” right to the fish in many areas. I have been guilty of this in the past and have posted videos to alert local anglers and guides where I am catching fish. Like most other anglers that have a passion for fishing, I enjoy getting away from everything and everyone while fishing. This has become increasingly hard to do as more anglers are spreading out and trying to do the same thing. There are also less fish than there have ever been in my area and several other areas along the coast that I fish. The fish that are in these areas have been hammered and now move a lot more than they used to. To stay on the fish, you have to move with them. Anglers that can find fish without the help of the internet or other anglers will be more successful as time moves on. Keep in mind that in order to have fish tomorrow, you have to throw some back today. Sadly, North Carolina is the only state in the south that still allows gill nets in their inshore waters. Until these destructive methods of harvesting fish from our backwaters is outlawed, we, as recreational anglers, will have to do what we can to protect the resource.