After several months of what many perceived as a lack of movement on the issues surrounding the North Carolina saltwater fishery, a small but potentially positive movement has occurred. On May 20th the NC Marine Fisheries Commission voted on the current draft of the Shrimp Fishery Management Plan Amendment 2 out for public comment and committee review.

The draft amendment focuses on the reduction of the bycatch of non-targeted species such as Flounder. The intent is to minimize the negative impact on the habitat. It includes options ranging from status quo to a complete closure of all inside waters, including Pamlico Sound, to shrimp trawling. The significant restriction of shrimp trawling in inside waters has been long-fought by recreational fishermen as well as some commercial fishermen. It is believed by many sources outside the NC Marine Fisheries that significant action in this area would play a key role in the recovery of multiple species like Flounder, Redfish, Speckled Trout as well as others. This type of restriction has been successfully implemented in nearly every state in the South Atlantic and Gulf coast with North Carolina serving as the only holdout. It also results in attracting trawling operations with ties to other states coming to inside waters of North Carolina to take advantage of the current lack of effective regulations. 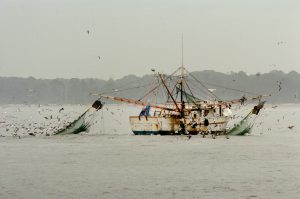 It was also announced that Division Director Kathy Rawls reviewed the updated timeline for Amendment 3 to the Southern Flounder Fishery Management Plan. Following the amended allocation decision by the commission at their special meeting in March, the revised draft Amendment 3 is scheduled to be reviewed and potentially approved for public and advisory committee review in November. As a result, the seasonal management adopted under Amendment 2 will continue through 2021.

This means that North Carolina recreational anglers will continue to be restricted to only 45 days of Flounder fishing and limited to only 4 fish per person, per day in 2021. This same restriction resulted in a significant failure to meet or even come close to NC Marine Fisheries’ projected goals in 2020. The question from North Carolina remains, “why is the NC Marine Fisheries Commission continuing to use a failed plan?”

Other recent events include the lawsuit that was filed in November of 2020 by CCA North Carolina which was heard in court on June 9, 2021, with the findings pending. The lawsuit addresses many issues surrounding the decline of North Carolina saltwater fishing resources. These findings are expected to be heard in the weeks to come.

Currently, a group of fishing organizations are considering joining forces to better communicate with the North Carolina fishing public The goal is to provide a more unified message and strategy to combat the current and growing problems. Such a strategy would involve the support of the state’s fishing public, both recreational and commercial since it does impact both groups. Coastal Carolina Fisherman Online Magazine (now known as Saltwater Angler) is one of those groups. It’s believed that working as a unified group with multiple strengths can result in a quicker and more positive outcome in the growing issues of the state’s declining saltwater fishing resource.

It’s now certain that any resolutions of North Carolina’s saltwater fishery decline will only be resolved when the people of North Carolina become involved in an organized and effective manner. This means becoming a part of that unified voice and speaking out to those that can and will dictate change. That change lies in the area of how the state of North Carolina perceives and manages this ever-increasing decline in our precious saltwater fishery. It’s going to take more than angry posts on social media and pointed comments between anglers. It’s going to take joining forces with that unified voice that I spoke of earlier and talking consistently to those that have been charged with the responsibility to successfully manage North Carolina’s resources. It’s time to move from failure to success. It will only happen when the people of North Carolina take action and demand change.

Over the past several months multiple groups have worked hard to change this failing direction of the North Carolina Marine Fishery and its associated agencies, committees, and groups. In the weeks ahead, they will come to you, the anglers of North Carolina, and ask for you to make your voice heard. I hope you will take the time to support this ongoing effort to effect change.