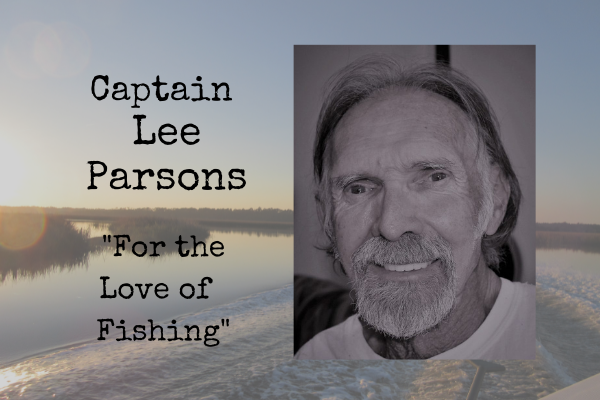 Back in 1998, I was an aspiring fisherman in Wrightsville Beach, NC. The term “aspiring” was a bit of an understatement for my knowledge and experience. Only 3 years before I drove a boat for the first time in my life, which is a story within itself. I pulled up to the dock of the Bridgetender Marina on a bright, sunny Tuesday to fill up my 18′ Angler center console with a 120 HP Force engine. An engine make that was known for its low cost and poor performance. This being the major reason you haven’t seen a Force engine on the back of a boat in the past 20 years unless it was in a junkyard.

As I pulled up to the fuel dock, I failed to account for the fact I was coming into the dock with my stern into the current. Everyone within 200 yards realized my rookie mistake when they heard my engine scream in reverse trying to recover from my stupidity. I quickly turned out into the ICW and circled back to the fuel dock bow first. As I made my approach, there stood a tall slender man with a greying beard and eyes that could penetrate a brick wall. That was the day I met Lee Parsons.

For many years Carolina anglers have come to be familiar with this slim frame and weathered outdoorsman profile when fishing the Cape Fear coast and beyond. In years past he was a familiar sight heading out Wrightsville Beach’s Masonboro Inlet in his Boston Whaler center console in search of Sailfish, Bonito, False Albacore, or other species. In recent years Lee has focused more on fishing the creeks and estuaries near his Topsail Island, NC home for Redfish, Speckled Trout, and Flounder.  He can be found poling his flats boat up the creeks looking intently for the signs of moving bait or the fins of a moving Redfish. Lee lives in a home with his dog Fisher, that he built himself with the help of friends. Weekends many times include the arrival of friends that join together with guitars, banjos, and more for an evening of music. It’s a tradition that combines great fellowship and talent. It’s a lifestyle largely free of the rat race that many of us face daily.

Since that first day on the dock at Wrightsville Beach Marina, I’ve enjoyed many days with Lee, both fishing near him on the water or just chatting about his recent days of fishing and closely listening to his thoughts on tactics, techniques, and lures. I also listen to his 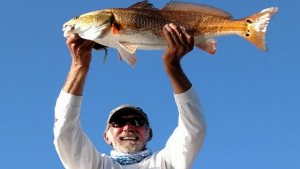 perspective on topics surrounding the North Carolina fishing regulations and other issues.  It was these conversations that played a key role in my fishing career because of the number of things I learned. When I founded what is now the Saltwater Angler Magazine in 2014, Lee was the first person I called to provide his unlimited knowledge. Since that time he’s shared countless perspectives on fishing tactics and most importantly what those tactics are based on. Lee has never been a fan of gimmicks and has remained a fishing purest. That purest mindset has never slowed his fishing success. Instead, it’s that mindset that’s made him what many, including myself, think to be a saltwater fishing guru. He takes his theories to places that most of us will never go to until he allows us to learn them from him. It’s topics like the “sour bottom” that Lee opens a world of how fishing the bottom and its acidity has a significant impact on our fish. The best part is how Lee has been so willing to share that wealth of knowledge with individuals like me and large groups at fishing seminars and fishing clubs, and many times at his own expense. That same knowledge that he shares with anglers, he also shares with lure designers and manufacturers like MirrowLures and others. They value his knowledge and expertise.

Captain Lee is a true fishing icon that has continued to give back to the sport more than he has ever gotten. He’s lives life on his terms and those terms include integrity and generosity. He’s provided thousands of memories over the years for those that had the pleasure of fishing with him and each one left knowing much more about fishing than they did before getting on his boat. I know, I have my memories that only Captain Lee can provide. Once, while still a rookie, I went speeding up into a bait ball when fishing for Bonito. Lee came on the VHF and quietly, yet firmly instructed me to stop “running and gunning”.  That scared the hell out of me, and Lee and I still laugh about it today. I also remember the day that he came out of Masonboro Inlet with a couple of customers and had his deckhand on the boat. His deckhand was a pet monkey. True story! I have fond memories of sitting on his dock box at The Bridgetender Marina on a cool April day eating fresh Bonita with wasabi sauce, the fish having been caught by Lee just a few hours before. 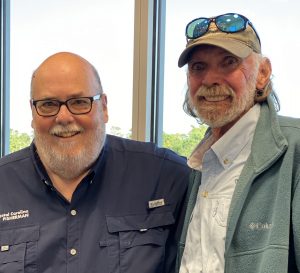 Captain Lee has been a great friend of mine for nearly 25 years. More importantly, he’s a friend of the sport of saltwater fishing, and he fishes because of his true love of the sport. He shares his experience and knowledge with others because it’s important to him that they too enjoy fishing as he does. Like many of us, he’s a step or 2 slower than he used to be. But’s out there nearly every day becoming even better so he can teach us how to be better as well. So, if you see an older guy with a graying beard slowly polling his flats boat up a creek near Topsail Island it’s likely Lee. Tip your hat to him. Then go home and tell your kids saw true fishing legend that day. You saw Captain Lee Parsons living life for the love of fishing. Thanks Lee!!!!