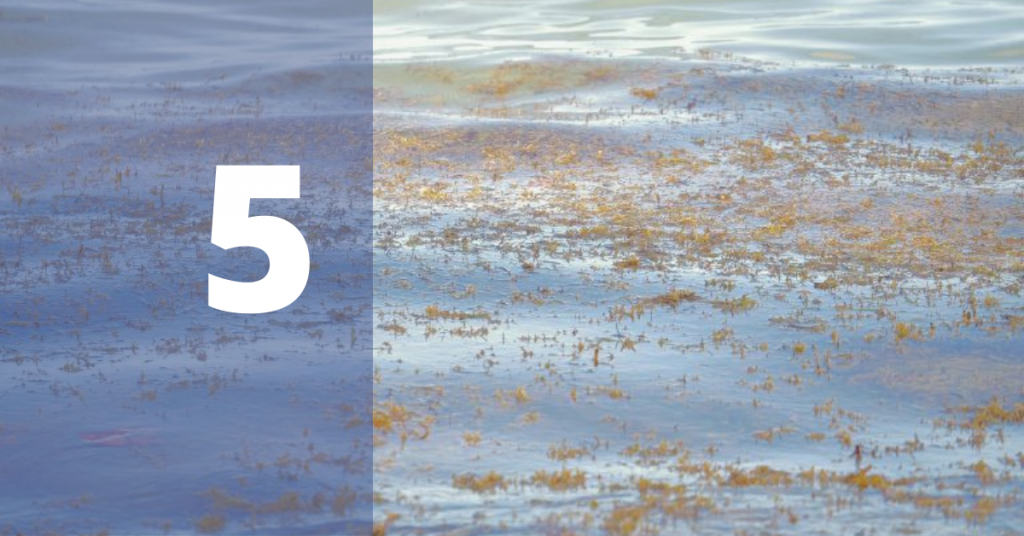 There is nothing that excites the offshore angler more than to encounter the patches of pure gold– a grass line, sitting on blue water. Absolutely, more valuable than 24-carat currency. Yes, this is the basics of blue water life offshore where current boundaries, upwelling’s, and the meanderings of the mighty Gulfstream collide with current boundaries to form beautiful situations on the offshore landscape.

Welcome to the Sargasso weed—a special habitat that teams with life and pure beauty. Sargasso weed (The family of brown algae–Sargassaceeae) is a floating plant that is found in all tropical oceans. It remains the only complete pelagic habitat that is not connected to a land-based system. This algae species is so important that it is classified as an “Essential Fish Habitat” recognized and managed by the South Atlantic Fishery Council (SAFMC).

Sargassum is abundant in the ocean. Upon detailed observation, it is easy to see the many leafy appendages, branches, and round, berry-like structures that make up the plant. These “berries” are actually gas-filled structures, called pneumatocysts, which are filled mostly with oxygen. Pneumatocysts add buoyancy to the plant structure and allow it to float on the surface. Floating rafts of Sargassum can stretch for miles across the ocean. This floating habitat provides food, refuge, and breeding grounds for an array of animals such as fishes, sea turtles, marine birds, crabs, shrimp, and more. Especially hunting Game fish. When Sargassum loses its buoyancy, it sinks to the seafloor, providing energy in the form of carbon to fishes and invertebrates in the deep sea, thus serving as a potentially important addition to the deep-sea food chain.

Sargasso grass is home to over 100 plus species of marine life and is critical to the life history and survivability of many species targeted by blue water fishermen/divers. Inhale these 3 examples (there are many more) for a small reminder. For example:

Sargasso weed is free-floating in the Atlantic Basin but congregates where current boundaries collide and push the free-floating grass as either solid weed lines or large mattes of floating grass. They are not only associated with the Gulf Steam but commonly occur well inshore as inshore water mass boundaries meet and congregate this greatness into mattes or weed lines. It is common to find weed lines and mattes just several miles offshore, especially in the summer months.

Weed lines are the ultimate habitats for a variety of baitfish where pelagic game fish hunt– Blue and White Marlin, Tuna, Dolphin, Sailfish, Wahoo, and other pelagic species hunt these weed boundaries. Often, these weed boundaries also provide a water temperature, water clarity, and divergence zone that concentrates baitfish and hunting pelagic game fish because of their location largely associated with a habitat change. The longer the situation exists, the better the congregation of baitfish and game fish predators in for the hunt. ROFFS™, which provides a “present view”, will sometimes show water stability boundaries for 4 or 5 days. Don’t pass it up!!

To locate the Sargasso habitat, it is best to consult your Roff’s fishing analysis and see visually where water mass boundaries are occurring, for how long, and the special place to find a weed line. The longer these boundaries are present, the better odds of finding gold and catching those special fish. Then consult your Maps Unique data to match water over good habitat. Gold on cobalt blue water—the best of the very best!!