While at the helm of the 52-foot Irvin Forbes-built Billfisher, Captain Mike Merritt had a young deckhand named Arch Bracher. One day Bracher asked if he could try something different when it came to leader material. Capt. Merritt, in his easy-going style said, “Sure go ahead as long as it doesn’t cost us any fish.” 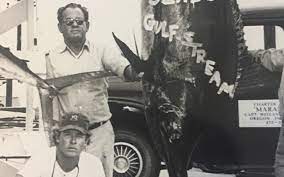 Weeks later the Billfisher was steadily doing just a little better than the remainder of the Oregon Inlet charter fleet. It was evident something was going on when one day as they approached the marina. “I’ll be behind your boat when we get in,” radioed Capt. Bull Tolson. That evening when the Billfisher backed into its slip at the Oregon Inlet Fishing Center, Capt. John Bayliss helped with one stern line and Tolson helped tie up the other. The impromptu meeting and the tackle inspection that ensued changed white marlin fishing to this day. The year was 1988.

Prior to the Billfisher’s experiment, the entire North Carolina fleet used wire leader with ballyhoo. Bracher’s decision to use mono leader and dink ballyhoo baits, similar to his Mexico sailfishing spread, brought about change in the fleet. Bracher’s eagerness to catch more fish and Capt. Mike’s willingness to change is one of many contributions Merritt and his crews have developed for the sportfishing industry.

Courtesy Of: In the Bite Magazine