The Changing Trend Of Offshore Fishing Boats And Why

On a June day in 2020 John Cruise and the Pelagic Hunter Fishing Team left out of Morehead City, NC in his 35-foot Contender center console in search of Blue Marlin. It was the last day of the Big Rock Blue Marlin Tournament. Time was running out for John and his team when he reached out to ROFFS™, the marine satellite imagery company for 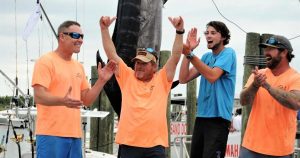 an update via sat phone. Within minutes they were heading at high speed to the updated location. They quickly got their lures in the water and started trolling. In what seemed like only a few minutes, a Blue Marlin hit, the fight began, and at the last minute, John Cruise and his team reeled in the big fish! The only challenge remaining was that time was running out for the team to reach the scales before they closed. Since minutes mattered, the team put the Contender into the wind and headed to Morehead. Making it just under the wire, they came to be the 2020 Big Rock Blue Marlin Tournament Champions. They also became the first to win the Big Rock in a center console. That was the day that offshore competitive fishing changed.

Sportfishing boats have always dominated offshore big game fishing, but the center console boats are beginning to appear. I spoke with John Cruise about this trend and he shared his thoughts on the pros and the cons of big game fishing from a center console. He was quick to let me know offshore fishing from a center console was not “perfect.” It did at times have its definite advantages, and at times those advantages can result in game changers.

First, we’ll start with the obvious, the fuel. Both diesel and gas prices are hitting around $6.00 per gallon. While a center console boat will burn gas rather than diesel the costs are fairly close. The gallon usage can be far apart depending on the center console’s length and the number of engines as well as the size of the sportfish you’re comparing it to. However, the center console will win that comparison in most cases and any savings in this area can be substantial.

This is an area where the center console wins nearly every time hands down. They’re built for speed and maneuverability. This means they are fishing first, longest, and they’re more agile. Being able to fish longer or later can mean winning and losing the tournament. It certainly means your lines are in the water longer, thus increasing the catch of fish as well as the winning fish. Also, since they are considerably more nimble and can maneuver more quickly, this is a benefit that can make the difference between a hookup or a miss. The center console’s hull configuration is made for a faster pick-up and run when the anglers decide to move to another waypoint. Especially in competition when minutes can make the difference between winning and losing, this benefit can be priceless.

It’s pretty obvious that the price of a sportfishing boat is a bit heftier than that of a center console boat. This is due to the sheer size, not to mention the many additional features that the sportfish carries. However, as the center console market seems to be seeing larger size options every year the prices also get larger, but still below that of the sportfish option. This allows anglers with a passion for big game offshore fishing an affordable option to enter and stay in the sport. But we also have to remember that you get what you pay for.

In this department, the sportfish wins hands down. The comfort is far beyond that of a center console as well as the ability to carry more fishing gear and safety items like life rafts. In the event of bad sea conditions, the sportfish offers great protection from the elements not only for the captain and crew but also for the gear. It has options such as tuna doors and enhanced electronics, as well as a flybridge that offers better visibility and line of sight.

It’s a fact of offshore game fishing, the sportfishing boat will never go away. It’s here to stay and stay it will. It’s the traditional workhorse of this part of the sport. It brings beauty and pride to fishing and represents what nearly every angler would like to have. It reigns at the top of recreational fishing boats and is a constant reminder of why we strive for perfection. 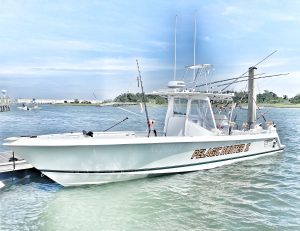 The growing use of offshore center console boats tells us that the sportfishing community is expanding. This feisty new breed of anglers is here to stay and they’re here to win! They trade comfort for speed because they realize that speed can be the determining factor in winning and winning is why they went out of the inlet.

In the 2020 Big Rock Blue Marlin Tournament a fishing team in a 35′ Contender center console boat took a somewhat bumpy ride back to Morehead City because the scales were about to close. That day they combined determination with speed and technology (ROFFS™ satellite report). It was a winning combination.

It’s my opinion that the center console boats will not take over offshore big game fishing in my lifetime. But, I do believe they will continue to grow and impact the sport even more.