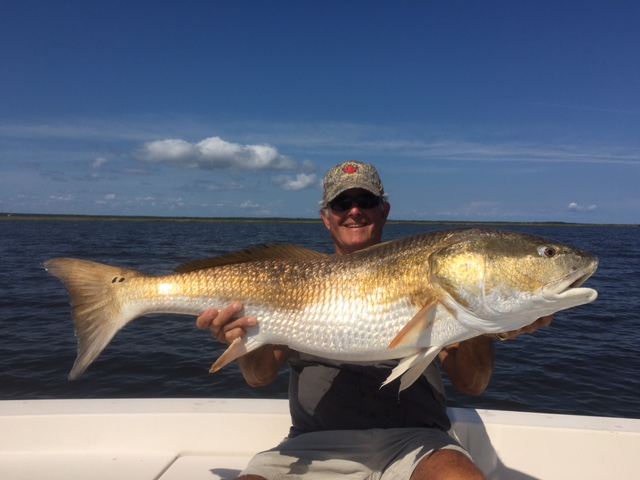 The mid and late summer means great Redfishing in North Carolina’s Pamlico Sound region. In the coming days of late summer, the large Reds will be feeding at full force. It’s a fishing experience that is unforgettable. We wanted to gain an inside perspective of Pamlico Redfishing, so we asked one of the most well known guides in the region (Captain Richard Andrews) of Tar-Pam Guide Service to give insight on the fishery and the best way to fish the Pamlico.

First, you have to understand that one of the most distinctive differences in fishing the Pamlico is the absence of big tide changes. Unlike the areas on the Carolina coast, the Pamlico has only slight tide shifts and therefore changing the way anglers fish for the Reds. Richard suggests that targeting structures like docks, bridges and other places that bait fish will be residing is a start. Grass beds, oyster beds and the river edges come next on the list of prime areas.

Fishing for the bigger Reds in late summer like mid-August can be an angler’s dream with the big bulls reaching well beyond the slot size. Your best bet when it comes to rigs is a good popping cork with a topwater lure. Make sure to up the strength of both your line and leader. These fish are not only massive, but they have the pull of a freight train. Be conscious of your drag at all times and be ready to work the drag as the fight goes on. It’s important to remember that these are over slot size fish and must be released. Take care to release them safely. 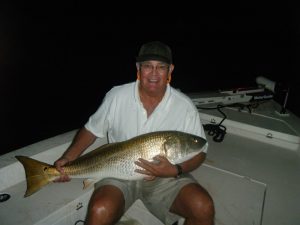 Even the smaller Redfish of the Pamlico are great fun to catch. Richard is quick to note that artificial baits are his preference for the Reds that fall below the big bull category. This seems to be part of a growing trend among many light tackle anglers over the recent years with approximately 99% of all baits targeting Redfish being artificial. This is largely due to the effectiveness of Berkley’s Gulp and other scented baits that are rapidly growing in popularity. The use of artificial baits also removes the need and associated time of locating and catching live bait which can be problematic on days when live bait is scarce. These plastics combined with jig heads makes for a deadly duo for the smaller version of the Pamlico Reds. Also popular and effective are spinner baits with popping corks. Another benefit to rigging in this manner is the potential bi-catch being stripers since they will frequently hit the same baits while you’re fishing for Redfish.

It’s the best time of the year for fishing the Pamlico and it will only get better in the weeks to come. Head that way and find out what it’s like to fight a Pamlico Sound Bull Redfish.