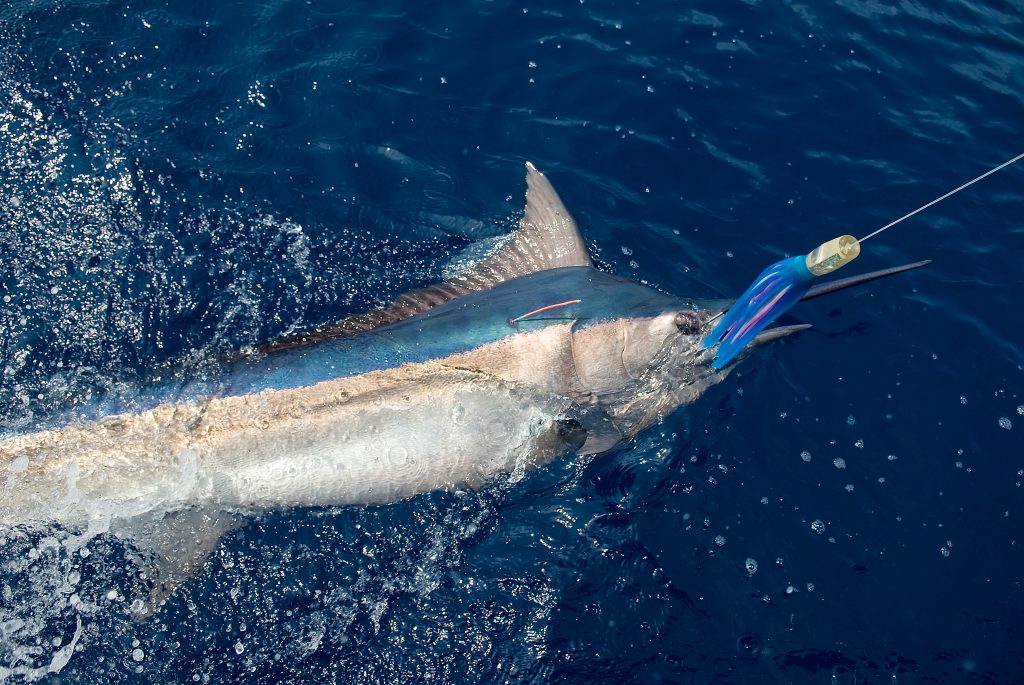 Since I can remember, I have always loved everything about fishing. But there has never been anything I wanted to do more than catch a Blue Marlin. My father fished in the Big Rock Tournament in ’96 and was the angler on a 369lb Blue. He had a VCR tape of the fight, and as a child, I watched it over and over in fascination and determination to do that one day and be like my dad.

Fast forward a little over a decade when I now own my boat, a 1995 24ft Grady White. I started fishing on it but had no clue how to fish offshore. Over time we have been blessed with consistency to bring good fish to the dock. However, I hadn’t caught anything with a bill much less a Blue Marlin. This is an expensive hobby. I have slowly upgraded my gear, but still don’t have “Marlin gear”.

Getting on to actual fishing, this year I finally ordered a full set of artificial lures. They were a medium size, just enough to get a billfish’s attention but more of a target to meat fish. Though holidays are no-go days for us, Memorial day was the first break in the weather we could get out. The day started rough by having to run back to the house after forgetting some things, then having to go 3 places to get ice. We got to the ramp much later than we wanted, but finally headed our way out of Beaufort inlet. 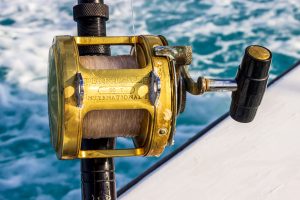 God gave us a beautiful calm day, and we hit nice blue water and tons of flyers around 30 miles out. I decided to keep pushing towards the break to get in some deeper water. Finally hitting about 400ft of water, something told us to go ahead and drop the lines even though we hadn’t hit another temperature break like I wanted to find before starting to fish. As the guys began putting on the new lures, one asked, “so what are we fishing for today?”.  I replied simply with, “Blue Marlin”  and everyone had a good chuckle but we did hope to see a smaller billfish at least. We were only fishing a set of old PENN 50tw spooled with straight 50lb mono.

Eager to get lines in the water, we put out the 4 flat lines. Less than 5 minutes after bait hit the water, while my mate Chris was working on the starboard outrigger, I saw a bill and tail in the biggest crash I had ever seen on our left short rigger. The fish immediately started diving to the bottom  “I think it’s a big Tuna” Chris said. Still, in disbelief of what I’d seen, I just shook my head and said, “it’s not a Tuna. Are you sure you want to know?”.  I broke the news we were about to lose all of our lines, “it’s a Blue Marlin and a big one”.  At this point, we are down to maybe 100yds on the spool, but I finally get in a position to follow the fish and keep from losing the rest.

About 30 minutes in, the fish came to the surface and stuck its bill out of the water before going straight back to the bottom. None of us could actually believe it was a Marlin. We also didn’t believe we would ever get it to the boat. The line was already extremely strained, and so were the anglers. I have no fighting chair and only a stand-up shoulder harness that is not made for fighting fish this big or for this long. We couldn’t put the rod in a rod holder due to the fish being down and not out with less angle.

The fight continued for two more hours, and we finally began gaining ground at a good pace as the fish returned to the surface. Over the next hour, we were gaining more and losing less on the runs. Finally, we got a quick leader touch before she made another run (which was more than we could have ever dreamed). About 20 minutes later, we had her on the leader by the boat. We tried to measure her and estimated she was just over 600lbs. We were all speechless as we took in the beauty of her deep blue and purple colors. It was a surreal moment looking into the eye of such a perfectly designed top predator, realizing we just defeated her in battle. Then, pulling the leader, we watched her swim away as we stood in silence trying to take it all in. Then the silence was broken by all of our cheers and high fives celebrating such an accomplishment. It took all 5 people on the boat to catch this fish, switching off fighting and driving.  Never having done it before, we worked like a machine and that alone was incredible.

On the way in, it came to me that my childhood dream had come true. It was an unforgettable experience.  It’s still talked about like it happened yesterday. One thing we all know, THAT fish had to be meant for us. All the things leading up to it and the fact that all of the tackle held up. We didn’t know it that morning, but God had a plan for us that day.