The Atlantic Flying Fish: A Sight Always Worth the Trip 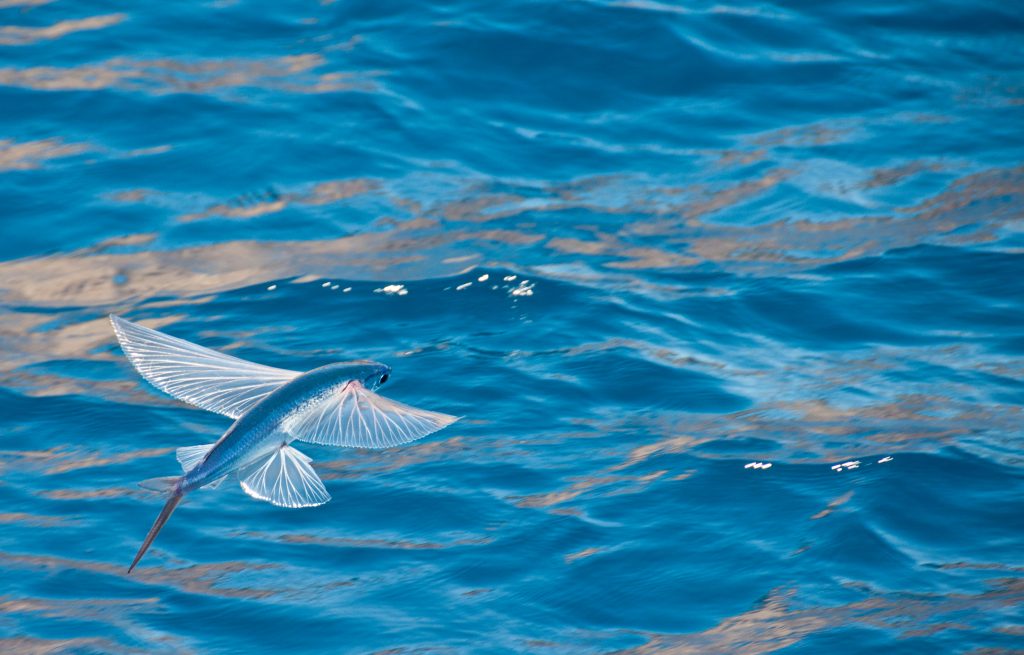 Boaters and fishermen in the southeast have many interesting encounters in our offshore adventures. But none will perhaps win over the pleasure and sheer delight of seeing school after school of Flying Fish as they go “airborne” away from your vessel. They are beautiful creatures, often glistening in the sunlight exposing their dark-blue upper side and dendritic veined pectoral wings as they aimlessly take to flight without a particular coordinate in mind, working both wind and sea conditions to their delight. They run in pairs, often in dozens and sometimes up to 100 smaller juvenile “Dragonfly” sized in one school. I believe when they are abundant, more than one fisherman has let them steal his attention his or her line? But the thing excites an angler most is the fact that this fish is prime bait sought after by most pelagic gamefish. Meaning, gamefish should be somewhere close by!

The Atlantic Flying Fish (Chielopogon Melanurus) has more than 50 species in its family as they are found worldwide in tropical and subtropical oceans around the world. They all share some similar traits such as being elongated, having a torpedo-shaped body, elongated and ridged pectorals, and an elongated lower tail fin for propulsion and flight. They can reach a speed of 35mph and a flying range of 200 to 300 feet is common. The average adult is 7- 12 inches in length and is believed to have a life span of 5 years. A familiar and beautiful sight is to witness a “flyer” going into a good headwind and stall briefly in mid-air changing directions to enter the sea at an unexpected point. It is equally beautiful in a fairly stout sea to see a flyer perform a “Kick-Off” from a good swell to boosts his flight for another 100 feet. A quite talented maneuverer I may say. They must have good eyesight too!

Flying Fish are mostly topwater filter feeders dining on phytoplankton, zooplankton, and very small crustaceans. They are believed to mostly feed at night when active congregations of plankton are active at the surface. Hence, swordfish are known to feed on this prized food source at night near the surface. Other species of the southeast that are known as active predators include marlin, tuna, dolphin, mackerels, and wahoo. No wonder your rigged ballyhoo’s do the trick, it is essentially a flying fish without wings!
Flying fish are most abundant in nearshore and offshore waters in the southeast during warm water. They utilize life within the main axis of the Gulfstream year-round. Flying Fish spawning times create lots of schooling among the species in the warm summer months and their fertilized eggs are camouflaged to look similar to a small live plant. They attach themselves to Sargassum grass by a sticky substrate. This is another excellent example of the importance of Sargassum being rightfully recognized as an essential fish habitat by The SAFMC.

Observations by most fishermen would agree that the flying fish are often found in and adjacent to good gamefish habitats such as water boundaries, water clarity and temperature breaks, and weed lines. Clean dark blue Gulfstream water pockets carry large concentrations as well. These areas are good for upwelling, blended water, and diversity that is also good for plankton and small crustaceans. Observations on that sixty-mile ride home from the Stream also reveal that sometimes large concentrations of fish occur in clean but somewhat dead water on featureless bottom. Perhaps these are the smart ones that move to less gamefish active waters during daylight hours to hide and hangout. Just a hunch!